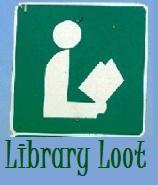 Library Loot is hosted by Eva at A Striped Armchair and Marg at Reading Adventures.

I checked out three books from the library this time, so now I have ten checked out total.  I can get away with this amount because my public library allows you to renew twice as long as no one else has a hold on it.  So I usually can have a book out for four weeks.

Anyway, the three in this library loot:

The Wreck Of The River of Stars by Michael Flynn

– This is by the same author of Eifelheim, one of my favorite reads of last year, so I’m very excited to read this one.  The River of Stars is the name of a doomed spaceship, thus the very sci-fi appearance of the cover.

Veil of Lies: A Medieval Noir by Jeri Westerson

– I saw the sequel to Veil of Lies in the New Mysteries section.  It sounded interesting, but I like to start at the beginning so I trotted back into the stacks to see if the first book was there.  I was in luck!  Stories set in medieval times tend to attract my interest and I like a good noir.

The Wonder Spot by Melissa Bank

– My library has a display that is sometimes thematic but usually just whatever the librarians feel like putting up there.  I remembered reading a good review of this book.  I’d seen the cover picture as a thumbnail image reviews, but never in person: I had thought that the image on the cover was a bird but it’s actually an aerial shot of a young woman walking in a red scarf.