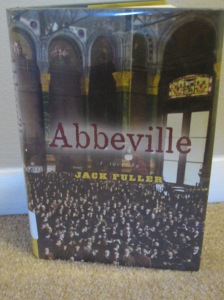 From: The public library

The Spotlight Series is a reading and discussion series focused on small press publishers, their authors and their books.  For this round, the spotlighted press is Unbridled Books.  See other reviews for this series on the Spotlight Series website.

After the dot com bubble burst, George Bailey (yes, he is named after the character in It’s a Wonderful Life) is financially ruined.  He returns to visit his small Midwest hometown – Abbeville – and there he considers his grandfather’s life.  His grandfather had suffered great loss due to the 1929 stock market crash.  The book tells the story of his grandfather, Karl Schumpeter, starting from his job as a clerk at his uncle’s logging camp in Wisconsin and spanning through the years and wars and family troubles until his death.

The premise of this book was not my usual choice of story, sounding a little dull to my ears.  However, I decided to take a chance on it, because sometimes judging by the story outline can lead to incorrect conclusions.

Unfortunately, I had to conclude that I’m not the right audience for this book.  I wouldn’t consider it a slog, because the prose is far too straight-forward to allow for anyone to get bogged down in it.  There are some good descriptions of places and times, such as the Chicago trading pits and Abbeville itself, but I just never connected with the story or the characters.

Perhaps because the story was framed in the grandson’s reflections, the details of the grandfather’s life all felt foregone.  I perhaps felt a mild curiosity about the unfolding events, but not an emotional investment.  The grandfather and most of the other characters are basically good people.  There are a couple of hard-hearted folks, including a childhood rival turned lawyer who is set up as the perpetual antagonist of Karl Schumpeter.

There were two characters that I found interesting that I wished had more time in the narrative: a red-headed street-smart secretary named Luella and Karl’s rich and calculating Uncle John.  The two of them look to be main characters at one point, but end up in the periphery instead.

It is a bit of a feel-good novel, with older characters always at the ready with solid advice and understanding for the younger ones.  There is inter-generational bonding over fly-fishing.  A small town comes together over a crisis.  Personally, I would have liked a little more charisma from the characters and a little more daring to the plot, but I wasn’t to get it.  I’ll have to do an end-of-the-year test on this one and see if it’s one of those books that grows in appreciation over time or if it’s of the more forgettable variety.

4 responses to “Abbeville by Jack Fuller”