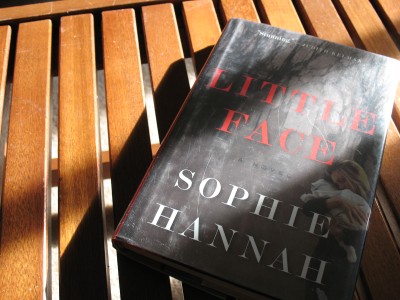 Recommendation from: Loved the author’s interview with Savidge Reads

When Alice Fancourt returns from her first outing away from her infant daughter, she insists that the baby in the crib is not her daughter Florence.  Her husband does not agree with her and the police do not find enough evidence to justify pursuing an investigation of kidnapping.  Detective Constable Simon Waterhouse continues to be bothered by the case, however, and when Alice and the baby disappear a week later, he starts digging into past events.

Little Face is told in alternating viewpoints: Alice’s first-person narrative starting from that fateful outing and Simon’s third-person viewpoint starting a week later, after Alice has vanished.  Neither are completely reliable narrators, and it is not a spoiler to say so, as the reader notices right off a certain vagueness and scattered small omissions.  I knew that I was not being given full access to information that the characters knew, but I wasn’t sure what that meant.  I was definitely rooting for Simon and especially Alice, as both of them were made solitary from others by their respective convictions about the truth of the situation.

Alice’s husband and mother-in-law were clearly manipulative people, but again, until the final revelations, I wasn’t sure what bad acts they were responsible for, exactly.  All I knew for certain is that they each were seeking to control Alice.  Her husband, David, was particularly disturbing in his growing animosity toward Alice.

The novel plays around with society’s perceptions of female hysteria, especially as it relates to new mothers.  A number of characters are eager to slap on the labels of post-partum depression, etc. onto Alice and be done with her claims.  I loved when Alice responded to her husband at one point: “Just because I’m upset doesn’t mean I’m not being rational.”

This is definitely an engrossing thriller – I ended up staying up way too late on a work night to finish it.  I will be checking out more works by Sophie Hannah in the future!

Farm Lane Books – “Unlike much of the crime fiction I have read recently this contained no unlikely coincidences. The plot was as realistic as it is possible to get, while retaining many clever twists.”

Reading Matters – “The story is one of those rip-roaring woman-in-peril narratives that starts out at a ferocious pace but eventually loses steam and ends up making the reader want to throw the book across the room out of disappointment and frustration.”

Scribbles – “Sophie Hannah has created brilliant characters in this book, she presents all of their flaws, making them particularly believable.”