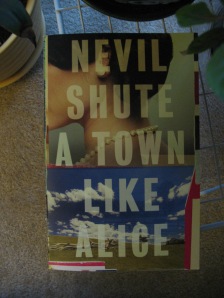 From: I bought this one from an independent bookstore in Vermont.

Noel Strachan, an elderly London solicitor near the end of his career, meets a young woman named Jean Paget who is sole heiress of her wealthy uncle’s estate.  The uncle was Strachan’s client and had stipulated that Strachan be a trustee of the estate until Jean turned 35 (the uncle had a poor opinion of women as managers of finances).  Strachan is struck by the poise and sense of Miss Paget and the two become friends.  It is through this friendship that Strachan learns of Jean’s ordeal as a prisoner of the Japanese when she was in Malaysia during World War II.  A Town Like Alice takes us back to that story and then follows Jean as she returns to Malaysia post-inheritance, and then on to Australia where she seeks to make her home.

I first read A Town Like Alice when I was in high school.  At the time, I knew that Nevil Shute was the author of Pied Piper, because my sisters and I had made that book’s TV adaptation (with Peter O’Toole) an odd favorite of ours.  My library at the time did not have Pied Piper but it had A Town Like Alice, so I read that instead.

As a teenager, I was a bit impatient with the slow beginning and the Australian section, but I loved the war-time story.  A group of women and children, including Jean Paget, are taken prisoner by the Japanese.  However, no one of the Japanese military officials wants the burden of overseeing this particular group of prisoners.  So they are sent marching all over Malaysia from one Japanese official to another.  (Shute based this story on a real occurrence that happened in Sumatra.) Along the way, disease and exhaustion thin the prisoners’ ranks considerably.

Jean Paget quickly emerges as a natural leader, aided by her command of the Malay language.  Along the way, she meets a couple of Australian prisoners.  One of them, Joe Harmon, makes an impression on her and she on him, but then tragedy separates them.

Now re-reading this book as an adult, I appreciate the entire story.  I like that it is a love story that deals with the practicalities of making a life together. Jean transforms a town so that she can live happily with the man she loves.

I admire the character of Jean for her resourcefulness and savvy leadership.  It is intriguing how she always seeks to work within the system to institute change.  When she negotiates with a Malay chieftain in one part of the book, she tells him, “If there were a man amongst us I would send him to talk for us, but there is no man. You will not be offended if I ask you to talk business with a woman, on behalf of women?”  Often Jean is rather slyly subversive in the way she convinces others to see things her way.

I do like how Jean is regarded as exceptional by other characters, but not by making all other women in the book seem inadequate.  She is often helped by other resourceful women in her endeavors.

The book could be a bit cringe-inducing at times in its 1950’s outlook on race, such as in characters’ discussions of the Aboriginal people in Australia.  For Jean doesn’t rock the boat when it comes to segregationist practices there.  The views of the time also show in its portrayal of gender.  For example, it is implied that Jean places sexual desire as the natural realm of men but not women.

Whether the characters’ views are similar to Shute’s own views at the time he published the book in 1950, I don’t know.  One has to take into account that Jean Paget’s whole story is filtered through the book’s elderly male narrator, Noel Strachan.

Which brings me to one final note on A Town Like Alice, which is that the framing narrative given by Noel Strachan is absolutely essential to the novel.  Jean Paget’s story is exciting on its own, but the pleasure comes from its contrast with the narrator’s more ordinary life.  Noel Strachan is a person of tradition and routine, with his work and his club, and a cleaning lady that comes by.  He is absolutely beguiled by Jean Paget, and lives vicariously through her as she travels the world.  Noel’s narration gives a lovely bittersweet tang to the novel, and it is he that provides the heart to the novel.

Katrina’s Reads – “The setting of Malay and the Australian outback are created before your eyes and I had a lovely picture of each in my head as I was reading this.”

Mad Bibliophile – “Jean is a terrific character and heroine and it was more often than not that I kept thinking that she was rather similar to one Jane Eyre – plain, alone and who make their own way into the world.”

Novel Insights – “It’s original and captivating, with great characters but the reason I enjoyed it so much is that it’s a brilliant story.”