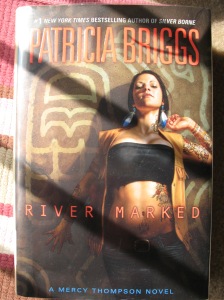 In a nutshell (slight spoilers if you’ve never read the series):

River Marked is #6 in Briggs’ Mercy Thompson series. Mercy Thompson is a shapeshifter who can turn into a coyote. This ability was presumably passed to her from her Native American father who died before she was born. In this book Adam (the Alpha werewolf of the local pack) and Mercy get married and go on a honeymoon on the banks of the Columbia River. While there, Mercy sees the ghost of her father. This vision is the harbinger for her reconnection to her Native American heritage, from which she has always felt estranged. In addition, Adam and Mercy must deal with an ancient murderous evil that has awakened in the river.

The Mercy Thompson series was my introduction to the urban fantasy genre, and while my interest in that genre has faded over the past year, my interest in the series remained firm. I love the character of Mercy for her abilities, her down-to-earth vibe, and her love for her friends and family.

The book just before this one – the fifth book of this series, Silver Borne – had been a minor disappointment for me. The plot was convoluted and featured too much of the werewolf-pack politics, at least for my tastes. River Marked really hit the spot for me because it focused on Mercy’s supernatural lineage.

One of the main fascinations for me with this series has been Mercy’s loner status. Partly because Mercy has kept her powers a secret, she has been able to surprise and elude many villains and other morally ambiguous types throughout the novels. It is so much fun to read when Mercy turns into a coyote and I miss it when a book skimps on Mercy’s shapeshifting scenes.

As explained in prior books, Mercy’s mother sent Mercy to be raised by werewolves, as their shapeshifting nature was the most similar to Mercy’s own power. However, werewolves are European in origin, just like the fae and the vampires. Mercy’s Native American supernatural forebears were presumably hunted down and scattered by these European brands of magical beings. Up until now, Mercy has never known another of her kind or even the history of shapeshifters like her. That all changes in River Marked.

I don’t want to give away too much about what Mercy discovers about her heritage, but I will say that this discovery goes hand-in-hand with meeting some of notable mythological figures from Native American folklore and it is pretty cool.

Alongside this personal journey for Mercy, she and Adam also face a continuous series of threats. It starts with the rescue of a badly injured man in a boat one night and reaches its climax in a desperate battle in the river. There is also an exciting and a bit funny hand-to-hand combat between Mercy and a surprise opponent in a Wal-Mart changing room.

The book starts a little slow and clunky, due to the massive amount of background exposition that Briggs has to try and work into the beginning. I definitely needed the exposition to review what had happened in the previous books, but it was still awkward in spots. However, once Mercy and Adam are on their way to the honeymoon, the writing smooths out.

So, fans of the series, there’s a lot to like in River Marked. And if you’ve never read the series before, the first one is called Moon Called. Ignore the trashy-looking cover and dive in!

Janicu’s Book Blog – “I’d call this a solid, maybe a bit muted installment of the Mercy Thompson series. With 5 books of non-stop action, there had to be a bit of a breather where Mercy could pull back a little and have the focus on herself and this was it.”

Love Vampires – “Briggs adds Native American mythology into her already bulging bag of fantasy beasties and manages to seamlessly incorporate them into her fantasy world without getting caught up on the different mythological ideologies.”

Spaz Reviews – “The Mercy Thompson series is one beautiful example of how the heroine in a series can find love and yet the series continues to grow and remain as entertaining and interesting, if not more so.”

One response to “River Marked by Patricia Briggs”