Just taking a break from writing about books to talk about recent events a little. I live in the D.C. metropolitan area, and last week was Natural Disaster Week for us and a lot of the east coast. I definitely felt the August 23rd earthquake as I work in Virginia and I was on a step ladder filing something into a drawer. All the metal shelving around me started shaking and making alarming noises. Needless to say, I got down off the ladder and away from the shelves. After it was over, I thought I might as well finish putting that thing back in the drawer, though my heart was still beating fast. A short while later, I heard that we were supposed to evacuate the building. So that was a bit of excitement.

And then there was Hurricane Irene, which in the end didn’t affect me much at all. I was in central Pennsylvania visiting a friend and she didn’t lose her power and when I got home, the apartment was also with power. I have at least one co-worker who is still without power as of today.

But really, it’s my relatives in Vermont that were impacted more. All of them are okay physically and their homes are okay, from what I’ve heard. My grandmother lost power for 24 hours and there is flooding near her and my aunt and uncle who live down the road from her. One of the  ‘cut-off’ towns, Cavendish, is quite close to where they live. Another aunt and uncle had been in Rochester, New York during the hurricane and it took them an entire day to get home to Bennington, VT due to all the detours around the road damage.

Some of Vermont’s landmark covered bridges are included in the widespread damage caused by the hurricane. This caught my attention because for the two past Memorial Day weekends, I have traveled up to Vermont with some of my Virginia relatives to visit the Vermont relatives, and we went around parts of the state tracking down covered bridges. Two of the bridges we saw are listed among the bridges damaged by Hurricane Irene. So I thought I’d put up some photos of covered bridges as a tribute of my affection for them.

The first two photos are of the Taftsville Bridge in 2010. According to the Vermont Covered Bridge Society, it has been damaged by the hurricane and is closed. 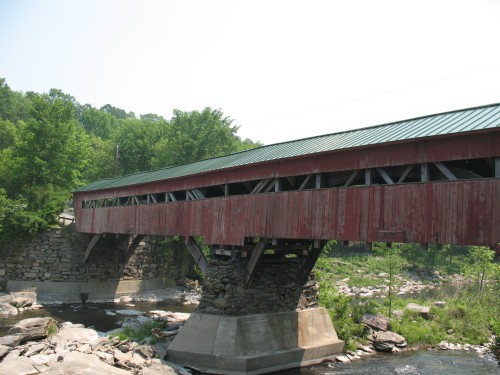 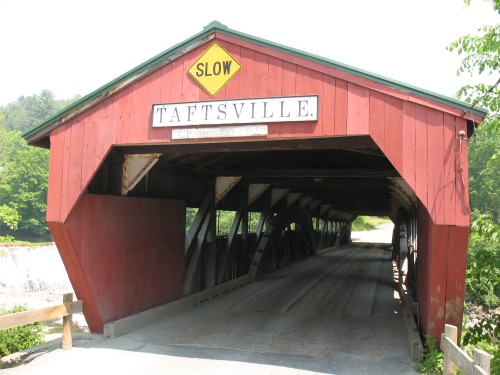 The next photo is of the Lincoln Bridge in West Woodstock, which is reported as damaged as well. This photo was also taken in 2010.

The other bridges in the photos below are not listed as damaged, as far as I know.

View from inside Hammond Covered Bridge: 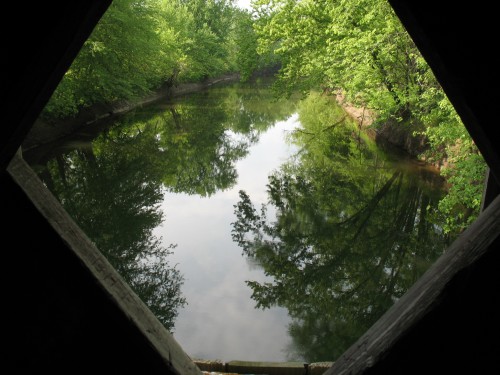 And this, I believe, is the Seguin Bridge: