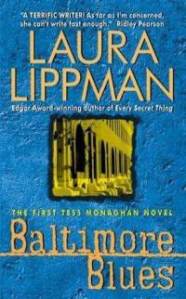 This is the first novel in Lippman’s Tess Monaghan series. Tess Monaghan used to be a reporter, before the Baltimore paper she worked for went under. Unemployed, she works part-time at her aunt’s bookstore and keeps up a rowing routine in the morning. When a rowing buddy offers to pay her to follow his fiancee, who has been acting weird, Tess accepts. But when the fiancee’s boss, a lawyer with the reputation of defending the worst criminals, turns up dead, Tess finds herself out of her depth.

I’ve had Laura Lippman’s Baltimore-set mysteries on my radar for some time, but knowing she would be at the National Book Festival, I pushed the first book of her Tess Monaghan series to the top of my reading list.

Although Baltimore is not far away from me, I have not visited it often, so I can’t vouch for the accuracy of Lippman’s depiction. But the setting is a huge part of this mystery, and I do have a penchant for mysteries that thoroughly burrow into their surroundings.

When I first started reading the book, I was wary of some of the details included. For instance, I didn’t like that Tess’ aunt had a quirky bookstore, because I doubted its ability to stay solvent, and also why can’t characters and their relatives have more run-of-the-mill establishments? Why must they always be quirky and successful? I digress.

I also didn’t like that the rowing buddy’s fiancee was a flawlessly beautiful, put-together bitchy woman in a high-status job, a character made even more stereotyped by being contrasted with our more grubby, down-on-her-luck protagonist.

But the book did start winning me over with the story nonetheless. Lippman definitely was good with misdirections and red herrings, and mysteries that may be linked to other mysteries.

I also liked that Tess showed how new she was to the game of investigating. She makes messes, says the wrong things, gets chastised by others for the previous. She has to try and figure out the right thing to do in gray situations.

There have been a number of mystery/thriller series that I have started but never proceeded further. I think that I will be more active in seeking out the second of this series, because – based partly on Lippman’s talk at the Book Festival – I think Tess will continue to evolve as an interesting character, and I think Lippman will serve up some nice, twisty mysteries for Tess to investigate.

Excerpts from other reviews:

Beth Fish Reads – “In the end, the pieces combine to build a logical solution; Lippman did not have to rely on magic tricks to tie up the crime.”

RhapsodyinBooks – “Tess herself is a little too much of a naïve risk-taker, and suffers from low self-esteem, but the first quality seems to be a sine qua non for female detectives, and the second humanizes Tess and draws us to her side.”

S. Krishna’s Books – “I loved the process of self-discovery in this novel as well as how Tess comes to terms with her life and the person she wants to be.”