Castle Waiting Volumes I and II by Linda Medley 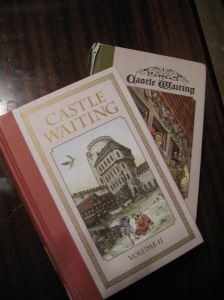 Castle Waiting starts with the story of Sleeping Beauty, but these two graphic novels are really about the motley group of characters who occupy the castle many years after Sleeping Beauty’s story is done. In the ‘present day’ narrative, the story is mainly domestic, telling of the amiable makeshift family that lives in the castle and how they get along. The main character, in a way, is a lady named Jain, who fled an unhappy situation while pregnant to eventually take refuge at the castle and give birth there. She quickly befriends the other inhabitants, which include capable Dinah and her slightly ‘simple’ adult son Simon, three elderly women who used to be Sleeping Beauty’s ladies-in-waiting, a talking horse, a taciturn blacksmith, the steward who is a talking stork, and a bearded nun. As a newcomer, Jain draws out the backstories of most of these characters.

The Castle Waiting books are cozy fantasy. Nothing extravagantly exciting happens at the castle, with most of the ‘action’ occurring in the characters’ backstories. In the first volume, for example, a big portion of the book is about Sister Peace’s past. As a girl who could grow a beard, she joined a circus and became friends with another bearded lady. They end up leaving the circus and discovering a religious order of bearded nuns, whose origin story is also told. At the time of reading the first volume, I wasn’t prepared for this long of a ‘sidetrack’ to the main story. I thought I’d be getting more of Jain’s story, which is kept quite mysterious. But I did enjoy Sister Peace’s stories.

I enjoyed Volume I but I was much fonder of Volume II. I felt there was more of a balance between life at the castle and the characters’ backstory diversions. Jain decides to move into a long unused part of the castle, and two guests help with checking for old traps and hidden passageways, to the delight of the younger residents. A magical trunk and a bowling game also figure into their activities.

For all that they are gentle and cozy, the books do refer several times to darker subjects such as a past war, the plague, and abuse. It makes the castle’s status as a refuge something that the reader can truly understand. Almost all of the characters have experienced loss of some kind.

A blurb from NPR on the back of Volume II lauds it for being “both women-centered and women-powered.” Particularly with Sister Peace’s story, this is true. I found the books’ approach to gender to be very refreshing not only in its approach to women but also to men. At one point, after looking after Jain’s baby, Simon wonders sadly to his mom why men can’t have babies, and she says she is sorry that is not the way God made things and comforts him. I’m pretty sure I saw the following thought in a review somewhere: by making home-life into the focal point, engaging the energy of both men and women, Medley subverts the expected connotation of home as female domain.

Just as the ‘action’ is mostly found in the backstories, so too is romance. The makeshift family in the castle are bound by the bonds of friendship, reinforced by their everyday tasks of creating a home together. Men and women relate to each other under terms that are platonic and familial, with requisite teasing and encouragement. This is also refreshing, expecially in fantasy. These are characters who are great company to the reader.

I have noted that there were four years between the first volume and the second, and can only hope that a third volume might be on its way and with slightly less of a gap. The story is definitely not done, with some intriguing threads left unresolved. There is some sort of ghost presence in the castle, for one, and also Jain’s backstory, while partially told in Volume II, is still far from complete.

Olduvai Reads (on Volume I) – “The 457 pages in this hardcover collection just fly by, and you emerge feeling like you’re part of the Castle Waiting family.”

Stella Matutina – “They face the same sorts of challenges that plague us all, and they get through them together. So some of them are anthropomorphic animals, or half-giants, or single parents to green babies. They’re people, first and foremost, and they have a wonderful family dynamic.”

things mean a lot – “Plus, Castle Waiting will delight fairy tale lovers with references to “Puss in Boots” and “Rumplestinskin” and other legends and myths that help create a truly magical atmosphere.”