A Game of Hide and Seek by Elizabeth Taylor 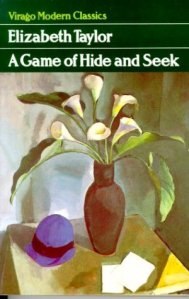 Recommended by: Buried in Print’s readalong (in May)

When Harriet was a teenager, she fell in love with Vesey, the nephew of her mother’s best friend. They fumble toward romance, but Vesey is a little too cruel and diffident and Harriet too passive to make much of a relationship out of their mutual attraction. Years later, Harriet is married with a teenage daughter of her own and crosses paths with Vesey, who is an actor, but not a terribly successful one. There is then, the classic set-up: do they rekindle a romance or do they stay with the life they already have? This is not a romance, but more of a domestic drama, with the third-person narration pulling in the viewpoints of Harriet’s husband, her daughter, the family maid Elke, and others.

A Game of Hide and Seek is not the type of novel I usually seek out. There is little in the synopsis that would entice me. But sometimes, if another blogger talks about an author long enough, I’ll take the bait and try him or her. Blogger Buried in Print posted quite a bit about author Elizabeth Taylor (note: not the same person as the actress) in the spring and hosted a readalong of A Game of Hide and Seek in May. I did finish it in late May or early June, but haven’t posted about it yet.

Taylor’s characters do not invite much emotional investment, especially her main characters. And they definitely do not invite admiration: Harriet and Vesey aren’t wise or ambitious or strong or clever. They are each a bit of a mediocre mess, especially when contrasted with their relatives. Harriet’s mom, Lilian and Vesey’s aunt, Caroline, were suffragettes who went to jail together. Taylor tantalizes the reader with snatches of Lilian and Caroline’s story and their friendship, and I can’t help but think that it’s deliberate. Taylor has passed over Lilian and Caroline’s possibly greater story in favor of weaker specimens of the younger generation. Perhaps she was making a comment about the generation that came of age in the 1920’s and then reached middle-age about the time of the book’s publication. I don’t know enough about the time or the author to say for sure, but that is what I wondered.

I had heard that the 1945 film Brief Encounter directed by David Lean was possibly an influence for A Game of Hide and Seek. One character in the book even alludes to the film, but not by name. Brief Encounter is an outstanding film, mostly because of the natural dialogue, and the winning performance of Celia Johnson as the main character. I rewatched it again this summer. The plots are slightly similar and there is some overlap in tone, with the meetings between would-be lovers conducted in cold outdoor settings and with a sense of futility from the start. I definitely recommend the film. David Lean is mostly known for his epic films like Lawrence of Arabia and Dr. Zhivago, but he was great at small intimate films like Brief Encounter and the lesser, but still good, Summertime with Katharine Hepburn.

I did enjoy Elizabeth Taylor’s writing, which in some passages was bang-on with its observations. Here is a passage about Harriet’s teenager Betsy, which I thought captured the melodramatic teenaged mind quite well:

Strange contrasts of vague perspectives and vivid close-ups made a film world of it, Betsy thought, and was inclined to glide up cobbled alleyways, close to the walls, hesitating at yawning entrances, her face paper-white, she imagined her blond hair gleaming. She regretted her school-satchel, feeling for a moment like some girl in a French film: shabby embittered, passive, poor. Glimpsing herself in a shop-window, she was surprised to see that she was only stony-faced.

Another passage I liked was a slightly humorous one from the perspective of the maid who works for Harriet and her husband. The maid is writing a letter to her parents about Betsy.

Elke wrote: “She shuts herself into the bathroom and shouts at the top of her voice. She wipes her mouth with her hand. She is more like a child with her knees showing. She is allowed to talk at mealtimes.” The first part sounded very amusing in Dutch. Her parents worried over these letters. They hoped that Elke would not try to speak at the table when she returned.

In the end, I did not care one way or another how the story turned out. Maybe it’s telling that my favorite passages were about the secondary characters. Still, I’m glad I tried out this book and this author. I may try another book by her. I think I marked down Palladian as a possible next book to read from Elizabeth Taylor. (Mostly I’m glad I finally wrote this review. Hopefully the next reviews will come easier to me.)

Buried in Print – “The children in Elizabeth Taylor’s works are consistently well-drawn. They are part  innocence and part experience, and the ratios adjust depending on the circumstances.”

Cornflower Books – “I found it an intriguing book – unsympathetic but penetrating, convincingly staged but with an ambiguous ending.”

Stuck in a Book – “[Taylor] writes the sort of novel that many could write, but concentrates so much on avoiding cliche and finding new life in her characters, that she is on another level.”