Notes on the National Book Festival and Introducing ‘Bean’

Happy autumn to everyone out there! Since moving to the D.C. area years ago, there are several fall events that traditionally make it to my calendar. One of these is the National Book Festival held downtown on the Mall. This year, I had to miss day one of the Festival, but a couple of friends and I were able to attend on the second day (Sunday). The weather was beautiful and there were book fans everywhere with bright Festival bags dangling from their arms.

I arrived twenty minutes into graphic novelist Craig Thompson‘s talk. Years ago, I devoured his graphic novel Blankets. Most of the questions directed to him by audience members involved his more recent novel Habibi. I know that I’ve seen mixed reviews of Habibi, but as often happens at the Festival, hearing the author talk about his/her book usually makes me want to go out and read it. Thompson said that his next book is planned to be an “all-ages spaceship adventure”. He explained that his previous works had been for more adult audiences and now he wants to write a graphic novel that younger readers could enjoy, just as he enjoyed graphic novels he read as a kid.

After snarfing down a burger and fries for lunch, I returned to the Sci-Fi and Graphic Novels tent to hear Nalo Hopkinson, author of speculative fiction titles such as Skin Folk, The Salt Roads and her newest book, The Chaos. I’ve never read her books, but I had heard of her through bloggers, including Eva of A Striped Armchair. Hopkinson happens to be having a little cluster of works coming out this year and next. She explained that this is not her normal rate, but rather she was recently able to finish various works-in-progress. For a couple of years, her partner’s health issues and her own health issues (fibromyalgia and anemia) left them with little income and so they couch-surfed for a time. I was really moved to hear her thank all of the people who helped her and offered them a place to stay. From this experience, she can tell aspiring writers that they are not failures if they can’t “write every day” as the usual advice goes. Just write whenever you can. Hopkinson gave a couple of shout-outs to fellow authors when an audience member asked who she was reading. She mentioned Jeremy Love’s Bayou, which is a graphic novel I’ve been wanting to get my hands on. She also praised short-story author Kelly Link whom Hopkinson met while they were in a workshop together. “I can’t be jealous of her skill . . . it would be like being jealous of a mountain.” She also mentioned the late Octavia Butler as an influence and is still stoked that Butler blurbed Hopkinson’s first book.

I stayed in my seat for the next speaker, Raina Telgemeier, the graphic novelist best known for her book Smile. I was quickly surrounded by a flock of pre-teen girls. This proved to be a very entertaining talk as Telgemeier asked one of the audience members to tell a true story of something that happened to them that was a little bit disgusting. Telgemeier would then make one page of comic panels depicting the story. A fairly self-possessed girl named Emily went up to the microphone and offered up her story of bladder surgery. Telgemeier asked a few questions, mostly “and then what happened” and wrote out a sequence of events on a giant sheet of paper on an easel. She expertly grouped some events together, and then on a blank sheet of paper started drawing evocative thumb-nail sketches of the story. It was very engaging and Emily got to take the resulting comic home with her. I do need to get around to reading Smile and her new book Drama sounds like it would be a great read as well.

After that I shifted to the Contemporary Life tent and heard Representative John Lewis talk a bit about his new book Across that Bridge: Life Lessons and a Vision for Change. The title references a 1965 march Lewis helped lead in Selma to protest against white persecution of black registered voters. Alabama State Troopers attacked the marchers with clubs and tear gas (Lewis’ head was fractured) and the incident came to be known as ‘Bloody Sunday.’ Lewis recounted this story as well as other memories of the Civil Rights era. His talk emphasized the reconciliation and great change that has happened since then. The audience gave several standing ovations to Rep. Lewis.

The last speaker my friends and I saw was Steve Inskeep, a journalist for NPR’s Morning Edition, and author of the book Instant City: Life and Death in Karachi. I actually started to read this book earlier this summer, but ended up setting it aside, distracted by a couple of other books. Inskeep was very articulate, which wasn’t surprising given his radio career. One thing that he said sticks out, which is that in his travels, he often finds that people in other countries follow what is going on with the United States closer than you’d think – and probably more than people in the United States think about other countries. I thought this was sadly very true. And it makes me want to go and pick up Instant City again as well as other non-fiction books about other countries and societies.

And that was my National Book Festival this year. As always, I left inspired to read more.

In non-book-related news, I recently adopted a cat from the county shelter. She is the first cat I have had as an adult and I am now forever telling cat stories at work. The shelter estimated her age as being three, but she could be younger. Here is my cat Bean: 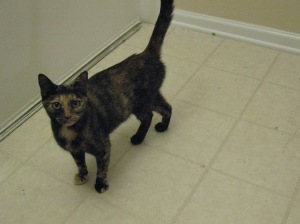