Thanks to jet lag, we all overslept the next day, which meant that a couple of sites were knocked off that day’s docket.

We joined the throngs of tourists at Topkapı Palace, home of the Ottomansultans for centuries. We shuffled through the lines in the Imperial Treasury exhibit and the Hall of Holy Relics. The treasures were pretty amazing – jewel-encrusted swords, daggers, helmets and a bowl of large emeralds. My favorite part about the holy relics exhibit was the fact that there is an imam chanting verses from the Koran 24/7, and has been since the 16th century. Such unbroken tradition for so long is fascinating to me.

We lost track of time in the pavilion area of the palace, and the Harem closed before we got to it. (The Harem portion closes an hour before the rest of the palace). That was disappointing, but we didn’t beat ourselves up too much about it.

Here are some of the palace photos:

Stork flying over one of the domes at the palace.

The Library of Ahmet III. Apparently BYOB – bring your own book. 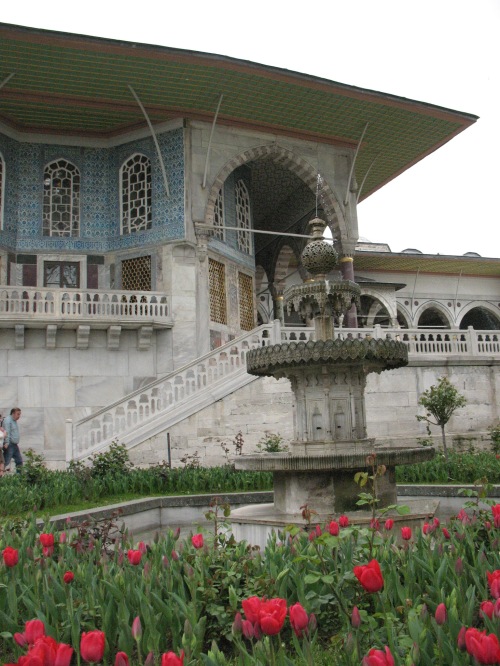 By the time we left Topkapı Palace, the nearby Blue Mosque had entered into a time of worship service. We ate dinner and then returned.

My sister snapped this fantastic photo of the Blue Mosque interior.

We returned by ferry to Kadikoy, taking a little time to explore one of the landmarks of that area, Haydarpaşa terminal before getting some dessert and then retiring for the day.