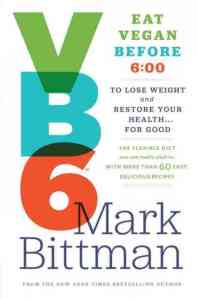 I saw this book at Barnes and Noble while waiting for a friend. It caught my eye because I own and use Bittman’s cookbook How to Cook Everything and have been wanting to take steps for healthier eating. I generally do well in keeping junk food or soda out of my kitchen, but I am terrible about including fruits and vegetables in my diet. I am open to eating far less meat and dairy products. Flipping through VB6, I saw some recipes and meal-planning ideas that looked intriguing, so I later bought the book.

Bittman writes cookbooks for a living and loves to make and eat food. When his doctor suggests that Bittman should probably become a vegan, Bittman knows that he needs to make a diet change, but one he’s likely to keep. In the introduction, he writes “the idea of becoming a full-time vegan was neither realistic nor appealing to someone accustomed to eating as widely and as well as I do.” So he became a part-time vegan. Breakfast and lunch were his vegan meals and then at dinner, he was free to eat whatever he wanted.

The time 6:00 is arbitrary, a symbol of a compromise. Bittman’s expectation – and how it worked out for him – is that the changes made to the first two meals will gradually influence change in the third meal of the day. Later in the book, he writes “as the months went by, I found myself eating fewer animal products and in smaller amounts, even at dinner, relying more and more on plants.”

The first part of the book is called “Weight Loss and Better Living.” Bittman describes the problems with what he calls the Standard American Diet (SAD) and explains why VB6 is better for your health, and how it works nutritionally. I must admit that the first 60 pages were a slog to read. Bittman discusses myths and facts about calories and carbs and fat and something called the glycemic index. As I was already convinced that more vegan meals were a good idea, this discussion held little interest for me.

I did wish that Bittman had discussed which non-dairy foods were rich in calcium. That is my major qualm about eating and drinking less dairy products. However, this perhaps reflects my particular health concerns rather than a flaw in the book.

At the conclusion of the book’s first section, Bittman lays out the six principles of Vegan Before 6:00:

1. Eat fruit and vegetables in abundance.

4. Cook at home as much as possible.

6. See your weight as just one component of good health.

A few years ago, I read Michael Pollan’s book In Defense of Food, which proclaims this maxim: “Eat food. Not too much. Mostly plants.” I find Bittman’s VB6 diet to be very similar philosophically, but I liked Pollan’s presentation better.

But Pollan’s book didn’t have recipes. And recipes are basically why I bought this book. I am aware that Bittman has a vegetarian cookbook and that there are plentiful vegan recipes on the internet. But Bittman’s cookbooks are so large and the recipes on the internet are countless. VB6‘s selected group of recipes are just enough to give me options while also appearing as a manageable set.

One of the things I like about Bittman’s approach to cookbooks is that he always provides alternatives and variations to the recipe. He’ll list a slew of topping choices for one dish, or a range of substitute ingredients. In VB6, he also recommends what to stock in your pantry, and how to make and prep food for future meals.

I read the book from beginning to end, which means I read all of the recipes, and picked a few that I wanted to try. Here is my report:

Homemade Cold Cereal – this is mostly rolled oats with nuts and fruit tossed in. I ate this for breakfast for several weeks, and mostly enjoyed it, but found the rolled oats a little bland in texture. My parents have suggested baking them, which I’ve yet to try, but I think that might improve the recipe.

Fruit Smoothie – my first experiment with using tofu in the kitchen. Silken tofu is used to make a nice thick smoothie, without any dairy products. I made this last night with frozen fruit and it was delicious.

Lentil Salad – I made this one tonight, but I was missing a few of the vegetables ingredients (my radishes and cucumbers had gone bad and I had no celery). I think the dish would have benefited from the extra texture and flavor these vegetables would have provided. Still, with the homemade vinegar and oil dressing, lentils, tomatoes and red onion, it was a satisfying meal.

Creamed Mushrooms on Toast – This recipe is perhaps the most successful one I tried. It’s basically blended cannellini beans mixed in with sauteed mushrooms and herbs. It’s great on toast, but surprisingly divine over roasted cabbage. I also tried the creamed mushroom over rotini pasta, but didn’t think that worked as well.

Black Bean Tacos with Tangy Cabbage – Another great success and responsible for my new appreciation for cabbage. The black bean mixture tastes great and pairs well with the cabbage (and other veggies) which form the topping. A definite keeper.

Smashed and Loaded Sweet Potatoes – This recipe is basically a substitute for a regular baked potato. I am impatient and have taken the microwave route with this recipe, but have liked it just fine. My topping so far has been horseradish. I may try other toppings, but right now I’m liking this combination of flavors.

All of the above recipes are from the breakfast and lunch sections. I haven’t tried any of the snack or dinner recipes. Also, though not from a direct recipe, the book got me to try sardines in a meal. (I found recipes online that recommended them on toast with mashed avocado. Not bad. Will try again.) I have also been more diligent about including fruits and vegetables with my packed work lunches.

I have definitely appreciated having the book around so I can consult the recipes. There are more recipes and cooking tips I plan to try, but so far I have been pleased with the results. I still need to work on having less dairy in the house (it’s hard because I love cheese), but overall, I’m optimistic about the change in my diet.

52 Books or Bust – “Perhaps because I cook vegan meals on a daily basis I found many of his selections to be on the boring side. The key to eating vegan for me is good, tasty and exciting food. I’m not sure if he provides that, though Bittman certainly provides an easy step into vegan cuisine for the reluctant cook.”

allows for individual flexibility and personalization, making the concept feel manageable, even for someone who hasn’t considered adopting a plant-based diet.

The Indextrious Reader – “I know people who have been put off the idea of veganism when it was suggested by their doctors because everything they read focused on animal rights, not a concept in their purview at all. Bittman’s focus on the health aspect (even while he does mention the environmental and animal costs of factory farming) is one that might be more easily assimilated by those new to vegan eating.”