Giants of the Frost by Kim Wilkins 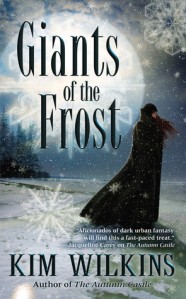 I read Giants of the Frost as part of Long Awaited Reads Month, which is a blogger event hosted by Ana of Things Mean A Lot and Iris of Iris on Books. Back in 2010, I read Kim Wilkins’ perhaps best-known book, a dark fantasy tale called The Veil of Gold, and loved it. In 2011, I read and enjoyed another Kim Wilkins’ fantasy, The Autumn Castle. From reading online reviews, I found out that both of these books were part of a loose trilogy called the Europa cycle; the books are thematically linked, but do not share any characters. The Veil of Gold was steeped in Russian folklore; The Autumn Castle had German fairy tale underpinnings; the middle book, Giants of the Frost, was inspired by Norse mythology. Unlike the other two, this one was not available from my public library. So finally last year, I bought it, in anticipation for this Long Awaited Reads Month.

As with the other two novels in the trilogy, Giants of the Frost‘s narrative alternates between present-day Earth and a parallel mythological world. Victoria Scott is a young, insomniac British scientist who has just arrived at a research station on Othinsey, an island off the the coast of Norway. She is soon informed that the island is haunted, to which she reacts with steadfast skepticism. But Victoria is wrong in her disbelief: Othinsey – otherwise known as Odin’s island – is the other side of a bridge to Asgard, land of the Norse gods, who still carry on with their lives. Several creatures of that world inhabit Othinsey. On particular Norse god, Vidar, is very interested in Victoria’s arrival at Othinsey, knowing her to be the reincarnation of his lost mortal love, Halla, who was murdered by Vidar’s father, Odin.

In Giants of the Frost, the creepiest things arrive just when someone is on the brink of sleep. Several scientists have taken to setting a 30-minute alarm clock in the watch station, so they won’t have to endure the vision of a hag who comes to steal their breath. They try to pass off the vision as an incident “isolated sleep paralysis” but after one such incident leaves Victoria with bruises, her default position of skepticism begins to falter. Wilkins is very good at evoking the more unsavory folkloric creatures and in creating an atmosphere of dread. There is a part in the book where Victoria and another scientist read a 10th century description of a strange weather event on the island, and it’s more chilling than one would expect.

Meanwhile in Asgard, Vidar seeks to travel to Victoria’s world (called Midgard by the Norse gods) without alerting Odin to her reincarnated return. According to myth, Vidar will be the one to avenge Odin when Odin is killed by the wolf Fenrir at Ragnarok. Odin doesn’t want Vidar to be lured away from his familial duty. With few allies among his family, Vidar reluctantly enlists the help of Loki, the trickster god. 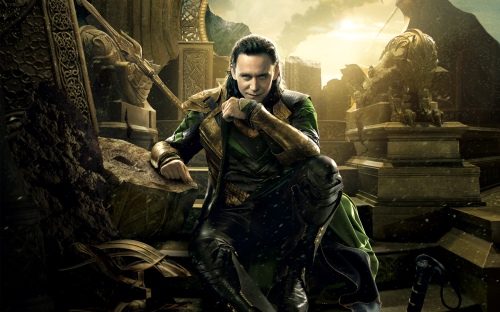 Let’s all acknowledge that this is what we’re picturing.

In the other Europa Cycle books, there was always at least one character who I adored; in Veil of Gold it was Em Hayward and in The Autumn Castle it was Christine Starlight and Eisengrimm. Here, my favorite characters were Loki and Vidar’s bondservant Aud. Aud is a Vanir princess who made a bargain with fate at the cost of her freedom. She also suffers from unrequited love for her master, Vidar. In this state of vulnerability, she enters into partial servitude to Loki, whose capricious nature is both a comfort and a danger to her. The interactions between Loki and Aud were my favorite parts of the book, perhaps because I found their storyline fresher than that of Vidar and Victoria’s story.

Indeed, I was not strongly invested in Vidar and Victoria/Halla’s romantic fate. I liked Victoria, but I found Vidar to be mostly one-note and boring. There’s a draggy section in the book where Vidar recounts his relationship with Halla, her death, and his quest to bring her back to life. The instalove elements to this romantic plotline didn’t help either.

The ending surprised me, in that it was “happier” than I thought the novel was going to deliver. To my indignation, I found out that this ending was provided only in the American edition of Giants of the Frost. (Kim Wilkins is an Australian author.) The original ending was quite different, and from reading online discussions of that ending, it appears to be the ending that I wanted, because it was the one that fit the book. So ironically for this Long-Awaited Read, it turns out that I have another wait ahead of me: the wait to read the UK/Australian version of this book.

Though my least favorite of the Europa Cycle, I’m still glad I read Giants of the Frost (thanks Loki and Aud!), and who knows, maybe my opinion of the book will improve once I read the original ending. I know I’ll still be reading from Wilkins’ backlist. Her early fantasy/horror books seem the surest bet, since I like her handling of the creepy elements in her stories.

Infinity Plus – “A novel where about half of the characters are preternatural beings (gods, in fact) is a tricky one to write for anyone, particularly in characterisation: too much humanisation of them is an open invitation to bathos. It’s a delicate balance and one that Wilkins doesn’t quite manage: the lengthy Asgard sections tend to mark time between Victoria’s account here on Midgard, which I found more compelling.”

Scholar’s Blog – “This is a very gripping book – akin to Neil Gaiman’s American Gods in the way that Victoria and Shadow respectively deal with the old gods and the supernatural when they encounter in their every day lives.”

Strange Horizons – “Although her characters and plot are not strikingly original, neither are they saturated with banal clichés. Indeed, her characterization of the minor human characters who work alongside Victoria is much more detailed and interesting than one generally finds in a linear fantasy novel.”

3 responses to “Giants of the Frost by Kim Wilkins”