The Inn at Lake Devine by Elinor Lipman 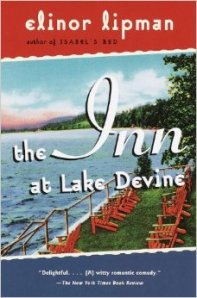 Recommendation from: Thomas at My Porch

The novel starts in 1962. Natalie Marx’s mother has written to various resorts about summer accommodation availability in Vermont. One innkeeper sends a letter back stating in part: “The Inn at Lake Devine is a family-owned resort, which has been in continuous operation since 1922. Our guests who feel most comfortable here, and return year after year, are Gentiles.” Twelve-year-old Natalie, fresh off reading the Diary of Anne Frank, is both outraged and intrigued by the anti-Semitism of the innkeeper. The following summer – part by chance, and part by Natalie’s design – she manages to inveigle an invitation to stay as a guest at the Inn. Her visit as a teenager turns out to have surprising consequences in her adult life.

I read The Inn at Lake Devine on the day I flew home from my vacation in Nova Scotia. I was immediately taken with Lipman’s style. She knows how to succinctly capture a milieu, whether it’s a girls’ summer camp, or an ill-managed inn. Here is an excerpt where Natalie describes the arrival of a new family in her neighborhood and the politics of childhood friendships:

For a few happy days, I was courted by both sisters [Marla and Shelley], who wanted nothing to do with each other. Marla soon recognized my low social standing on the street – defined by my braces and glasses and twenty-inch bike – and worked her way into the clump of girls a year older (Claudia Forestall, Marybeth McKemmie, my sister, Pammy) who took the public bus to the junior high and dressed alike. Our mothers took us two younger girls to lunch in department stores, pretending we were better friends than we were. That’s how it was on Irving Circle and how I was raised: You made the best out of what was within reach, which meant friendships engineered by parents and by the happenstance of housing. I stayed with it because we both had queenly older sisters who rarely condescended to play with us, because Shelley was adopted and I was not, because Shelley had Clue and Life, and I did not.

Natalie, particularly adult Natalie, is a very likable character. There’s a part in the story where she steps in to help almost-strangers when they are struck with tragedy. And it’s not an act of saintly heroism, but I was struck by the wonderful human decency of it. Likability is not necessary for me to enjoy a story, but it is enjoyable to read a book and have the reaction: “I like you, main character. You are a decent person and I am on board with you.”

I knew very little about the plot going in, but was happy to follow wherever Lipman decided to take the story. And Lipman took the story in some unexpected but ultimately delightful directions. These unexpected directions aren’t handled as *big twists* at all, but I still won’t spoil you. I find it is a great pleasure to discover while reading a book that you have complete, instinctive trust in the storyteller.

Bookchatter – “As far as pace, I breezed through the book and read it in one sitting. There was one spot where it dragged a tad, and got a bit silly, but not enough to make me want to put it down.”

BookLust – “I salute Elinor Lipman for bringing attention to a serious issue by presenting us with a happily-ever-after comedy.  Well done!”

Brazen Bookworm – “If you’re looking for the perfect book to while away a summer afternoon, look no further”

Unputdownables – “The characters are fleshed out, and the story original. Lipman doesn’t ever hold back on the bad parts of life, but she also gives us humor and great pacing.”

6 responses to “The Inn at Lake Devine by Elinor Lipman”