Last year, I set a challenge for myself to read books by authors I’d seen at the Washington D.C.’s National Book Festival, roughly one author for each year I attended. I read eight books in total. Here is a review of two of them. 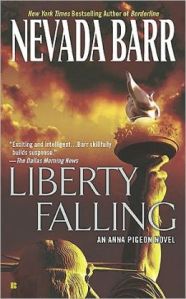 I fell into the Anna Pigeon series back in the summer of 2004 when I was working in Bar Harbor. The town’s public library had #12 High Country in the new releases section. The titular Anna Pigeon is a forty-something park ranger and each book in the series takes place in a National Park. High Country had a great action / survivalist set-piece in Yosemite and it was that woman vs. nature element that hooked me into reading other books in the series. (Blind Descent was also one of my favorites, set in the claustrophobic setting of the Carlsbad Caverns.) Barr herself worked summers in various national parks so every book gave the sense that you were going behind-the-scenes, even if the mystery plots themselves strayed into incredulous territory.

I haven’t read Barr in years, after I burnt myself out on the series by reading too many in a row. Liberty Falling was perhaps not the best one to pick up as a return to the series. Though the details about Ellis and Liberty Island were interesting, as a setting they didn’t offer the same opportunities for Anna to grapple with the wild as the larger western parks. Also, I found the determined cleverness of Barr’s writing to be hit and miss; sometimes her turn of phrase was really funny or apt, but sometimes the writing was too convoluted for its own good.

The series is still ongoing – I see that the most recent entry, Destroyer Angel, is set during a canoe trip in upstate Minnesota (intriguing – my sister once went on a canoe trip with a friend in the Boundary Waters).

Bibliophage’s Buffet – “The location details were fascinating, and the plot-line with Molly and Frederick’s romance was interesting and important.  Still, the mystery itself felt a little more contrived than the best of her other books that I’ve read so far.”

Vixen’s Daily Reads – “I am glad this wasn’t my first Anna Pigeon mystery, I might not have tried another.”

The Rule of Four by Ian Caldwell & Dustin Thomason

Genre-wise, The Rule of Four has kinship with The Da Vinci Code: smart people seek to solve mysteries hidden in ancient works which somehow leads to people getting murdered. This is normally not the type of plot I gravitate toward, but I remembered my longtime Festival-attending friend said she liked it, back when she read it in 2004. The ancient work featured in The Rule of Four is the Hypnerotomachia Poliphili, a dreamlike and cryptic 1499 Italian work. The two main characters are Princeton seniors who become obsessed with decoding the Hypnerotomachia. When a graduate student is publicly and dramatically killed on-campus, the mystery of the text becomes intertwined with the murder mystery. Academic infighting and Princeton traditions form the backdrop.

Similar to Liberty Falling, I enjoyed how the authors’ inside knowledge of the setting (Caldwell went to Princeton) added believable specificity to the collegiate scene. I also liked the revelation of the hidden meaning of the Hypnerotomachia. Too often, when a book dangles its Secret throughout the book, the payoff isn’t worth all the hype. But Caldwell and Thomason invented a good high-stakes ancient Secret. I was impressed.

Unfortunately, I was not very engaged with the characters and at times the book just dragged. I probably would have given up if I hadn’t wanted to finish it for the challenge.

Excerpts from other reviews:

My Round File – “There were glimpses of interesting and quirky Princeton traditions, insider scoop always appeals to me, but this came off kind of arrogant so I didn’t get a lot of pleasure there.”

Pat’s Fantasy Hotlist – “The narrative explores what they are going through on the eve of graduation, and this is the facet of the novel which is truly inspiring. Forget the hype. Forget the riddle. Forget that it’s a thriller, for it’s not truly a thriller.”

Wordsmithonia – “Their characters are fully functioning, three dimensional constructs, they could be any of us, if we were obsessed with obscure texts and had men being killed around us.”