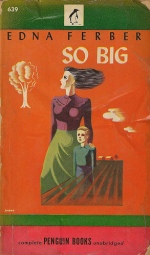 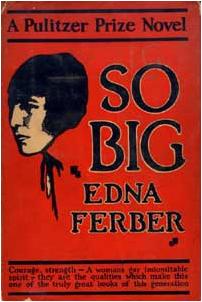 #19 was the chosen number for this Classics Club spin, which means I am set to read Edna Ferber’s Pulitzer Prize winning novel, So Big, which was published in 1924. And in a fun twist, Australian blogger Brona of Brona’s Books had also lined up So Big at #19 – she constructs her spin list so that most of the books will yield a reading buddy if chosen. And this time, it just happened to be me. Yay!

I had to look up the plot summary for So Big, because apparently the book has been on my to-read list long enough for me to forget.

From the Goodreads summary:

“So Big” is a classic novel of turn-of-the-century Chicago. It is the unforgettable story of Selina Peake DeJong, a gambler’s daughter, and her struggles to stay afloat and maintain her dignity and her sanity in the face of marriage, widowhood, and single parenthood. A brilliant literary masterwork from one of the twentieth century’s most accomplished and admired writers, the remarkable “So Big” still resonates with its unflinching view of poverty, sexism, and the drive for success.

A look at my notes shows that I added So Big to my to-read list after reading a positive review by Jackie at Farm Lane Books. From Jackie’s review, Selina sounds like a fantastic character.

I would have been happy with almost any book on my Spin List, but after refreshing myself on why I wanted to read Ferber’s novel in the first place, I’m especially looking forward to reading So Big.

I haven’t done one of these in a while. Basically I list twenty books from the fifty I challenged myself with when I joined the Classics Club in 2012. Then next Monday, the organizers will pick the random number and that will be the book to read in December/January.

We’ll go with these categories:

Five classic travel narratives in addition to the three already listed above:

12. Travels with Charley: In Search of America by John Steinbeck [1962]

And a final book for no particular reason: