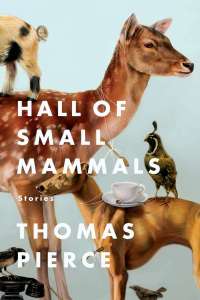 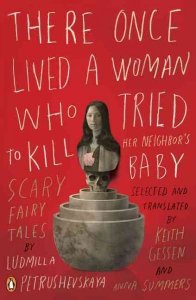 There Once Lived a Woman Who Tried To Kill Her Neighbor’s Baby: Scary Fairy Tales by Ludmilla Petrushevskaya. Translated by Keith Gessen and Anna Summers.

Recommendation from: it was included in one of Eva’s Library Loot vlogs

Of the four books I was eyeing for this month’s #weirdathon (hosted by Julianne of Outlandish Lit), I read two, and they were both collections of short stories.

Thomas Pierce is a young American author and Hall of Small Mammals is his book debut. Ludmilla Petrushevskaya is a Russian author in her late 70’s who has had a long literary career. There Once Lived A Woman . . . served as a major entrance of her work into the American publishing scene.

I found Hall of Small Mammals to be really delightful and satisfying to read. The first story, “Shirley Temple Three” starts off on a good foot; it’s about a woman whose adult son asks her to keep a small mammoth at her house for a while. I loved watching the main character bond with her unusual charge. I was going to list all of my favorite stories in this review, until I realized that would mean two-thirds of the stories. I feel like I should focus on the weird stories since this was a #weirdathon pick, like “More Soon” where a man receives regular updates from the State Department on the whereabouts of his brother’s highly infectious dead body. But I also found the non-weird stories like “Felix Not Arriving” and “Ba Baboon” to be very compelling, especially the brother-sister relationship in the latter story. Perhaps the real treat of the collection is “Videos of People Falling Down” which is a string of tiny interconnected stories that are all preceded with click-bait internet video titles like People Falling on Snow/Ice Funny!!!

Outlandish Lit – “My only issue with these wonderfully strange stories was that a lot of them just kind of stopped.”

Six-Demon Messenger Bag – “what makes them so good is not the bizarre or the science, it’s that they are rooted in these terrific moments of human relationship dynamic.”

There Once Lived A Woman . . . is subtitled Scary Fairy Tales, though I would personally classify many of the selection as ghost stories. Some of the stories were incredibly slight and not particularly memorable. However, there were a few that I found rather haunting. The nightmarish “Hygiene” follows the effect of a plague on one family. While there was probably a layer of cultural meaning I missed in “The New Robinson Crusoes: A Chronicle of the End of the Twentieth Century”, I did really like its semi-apocalyptic feel. In this story, a family retreats further and further from the threats of civilization, taking in other strays along the way. My favorite may have been “There’s Someone in the House” where a woman living by herself begins to feel like there is another occupant in the apartment and begins to purge her belongings in an increasing manic state. I really liked the ending of this story – there was a real restorative spirit to it. It may not be a coincidence that two out of the three stories feature a cat in an important role.

Benjamin from Goodreads – “If I had to pin it down, I’d say she’s really figured out the intersection of spookily unnerving contemporary fiction, folklore, and the ghost stories we still remember and re-tell, long after we stop believing in ghosts.”

Kayl Parker from Goodreads – “Some of the stories I found too romantic, or, as the book is actually labeled a Horror Collection, I found them too safe. There were a few . . . that no reader should miss.”

Stephen Durrant from Goodreads – “the closest I can come in my own lexicon for a term to describe this collection is from classical Chinese: 志怪 zhiguai. Loosely translated, this means something like “accounts of the bizarre”“