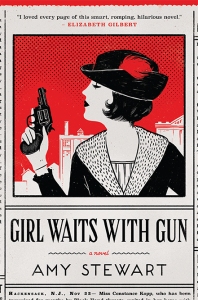 In Girl Waits With Gun, Amy Stewart gives us a fictional story based on a real woman and real events. The year the story starts is 1914. Constance Kopp and her two sisters – one of them a teenager – live together on a farm in New Jersey, despite their brother’s wish that they live in town under his “protection”. One day, their buggy is overturned during an accident involving a careless driver of an automobile, who happens to be a local factory owner by the name of Henry Kaufman.

When Constance boldly presses Kaufman for compensation of the buggy, in a way that pokes his easily bruised ego, Kaufman escalates matters. The sisters soon become the targets of intimidation by Kaufman and his cronies. With the help of the local sheriff, Constance seeks justice and safety for her family. Additionally, Constance is moved to help a young factory worker whose son she had by Kaufman has gone missing.

One of the things I loved about Girl Waits With Gun is the historical specificity. I don’t read a lot of historical fiction, but enough to realize that many novels in that genre try to connect their story to an uber-narrative of that era, some widely understood concept of that time period’s role in the greater story of the United States or Great Britain etc. (For example: the Roarin’ 20’s and all the shorthands for that decade that have made it into cultural memory.) The uber-narrative is not always a bad thing, but it can be if used lazily. Girl Waits With Gun dodges the uber-narrative, mostly because Stewart keeps her novel at a local history level, which is a territory that feels rather refreshing. Smoothly incorporated local history tidbits make the novel’s setting feel really lived-in and real.

Stewart wisely makes few deviations from the true story of the Kopp sisters’ conflict with Kaufman. I think some authors would have been tempted to put a 21st century spin on that storyline, which would have just made it bland. When I read the afterword, I was surprised and pleased to find out just how much primary source material made it into this novel. I’m guessing that Stewart’s judicious use of her research stems from her extensive experience in nonfiction writing (The Drunken Botanist, Wicked Plants).

Girl Waits With Gun jumped to the top of my to-read list when it was recommended to me as a book that featured a never-married female protagonist who has no romantic interest during the course of the novel. I have been on the lookout for books fitting that description ever since posting my review of Barbara Pym’s Excellent Women. (So has Teresa of the blog Shelf Love – she wrote a post on Book Riot about it. And we have a list on Goodreads.)

***Spoilers*** While Girl Waits With Gun certainly belongs on that “single ladies of fiction” list, one of the central emotional throughlines of the novel is based on the (real-life historical) fact that Constance’s youngest sister Fleurette is actually Constance’s biological daughter, born from Constance’s teenaged tryst with a traveling salesman. Fleurette is ignorant of her true parentage, but Constance still struggles with her maternal feelings for her daughter. It is a fascinating layer of the story, don’t get me wrong, but I realized that I’m especially longing for “single ladies of fiction” books that have a protagonist who has no children as well as having no romance. ***End Spoilers***

All in all, I really enjoyed Girl Waits With Gun, and plan on reading the next book in the series.

A Work in Progress – “Girl Waits with Gun is a fun story, mostly very light-heartedly presented, but an interesting look at early modern America.  If you are wary of historical fiction, this is a story that wears its details lightly.”

living read girl – “Girl Waits With Gun does have the flair of such fictional feisty female crime fighters such as Miss Phryne Fisher, who I think Constance would get along well with, even if she’s not as much of a party girl. Both ladies share a keen set of wits and plenty of savvy to deal with trouble at their doorstep, despite what the men about them might think”

loudlatinlaughing – “The most delightful and entertaining fiction I’ve read in a while, with an ending that doesn’t drag and drag but that is ultimately perfect, you read to the last drop on the page.”