Unfair: The New Science of Criminal Injustice by Adam Benforado 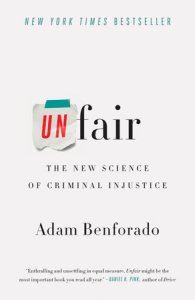 Adam Benforado is a law professor whose courses include a seminar called “Law and Mind Sciences”. Reading Unfair: The New Science of Criminal Injustice feels like taking a survey course on the topic. Each chapter focuses on a particular stage of the American justice system and examines that stage in light of psychological and cognitive science research. The chapters have titles such as “The Labels We Live By – The Victim” and “In the Eye of the Beholder – The Jury”.

Benforado’s main argument is that our justice system rests on incorrect assumptions, even dogmas, of how people think, respond, act and make decisions. These assumptions contribute to the miscarriage of justice, including the conviction of innocent people. We should rigorously review police and court practices to make sure these practices are in line with empirical evidence of what works to actually achieve justice for all.

I would like to highlight two of the chapters that really stood out to me. Chapter 2 “Dangerous Confessions – The Detective” focuses on the fallibility of police techniques for interrogating suspects, especially the commonly used Reid approach. This approach encourages aggressive, lengthy interrogations, and allow for police to lie about the evidence in their possession. Subject to hours of beration and isolation, people will sometimes falsely confess just to escape the abuse. In the moment, people may have cognitive myopia and find it hard to remember long-term consequences when there is an opportunity for short-term relief. Unfortunately, in the justice system, once a confession is extracted, the investigation becomes biased and may ignore details of the confession that don’t align with the evidence. At the end of the book, Benforado describes how the UK has changed its interviewing techniques where the goal is to get as much information as possible from suspect, rather than trying for a confession. “The reforms have not only reduced the likelihood of a suspect admitting to a crime he didn’t commit, they’ve actually increased the amount of useful information that guilty suspects reveal.”

Chapter 6 “The Corruption of Memory – The Eyewitness” argues that eyewitness testimony is frequently mishandled in our current justice system. Eyewitness memory is treated in the justice system like it can be played back exactly the way it happened. But over time, we lose specifics and additionally, all memory is filtered “through the lens of our motivations, expectations and experiences”. Benforado offers many research studies to support the fact that our memory is very malleable after the fact. Primary investigators who have a theory of how the crime happened may inadvertently direct the witness’ memory. Lawyers who mean well can alter an eyewitness testimony through witness prep. As Benforado writes, “A memory of a perpetrator’s face is just as susceptible to adulteration and misuse as a hair sample or partial fingerprint taken from a crime scene, but we don’t treat it that way.”

In the second-to-last chapter about the challenges of reform, Benforado points out that many procedural rules give the appearance of eliminating discrimination in the legal process but actually fail to do so. For example, the Supreme Court banned lawyers from removing people from jury selection on the basis of race alone, but discrimination still happens. Benforado included this astonishing anecdote about jury selection process: “Between 2005 and 2009, prosecutors in Houston County, Alabama, struck approximately four out of five blacks in capital-case jury panels. About half of the resulting juries were all white, and the other half had only a single black juror.”

The final chapter of the book “What We Can Do – The Future” is an exciting conclusion to the book as Benforado describes multiple paradigm-shifting possibilities for reform. One of the most intriguing reforms that he mentioned was the idea of the virtual courtroom. This would mean that victims wouldn’t have to be in the same room as their attackers. This would mean less reliance jury’s overconfident conclusions drawn from the appearance and demeanor of witnesses and defendants. (We are not as good at detecting innocence and guilt as we think we are.)

Benforado also questions whether our current adversarial approach really serves justice. He frames the common practice of plea bargaining in a way that I had never considered before:

…the adversarial system has played an important role in the shift from quick and relatively straightforward proceedings to trials that are long and extremely complicated. And with lawyers constantly wrangling over procedural rules, it’s no longer possible to provide regular trials to everyone charged with a crime. We just don’t have the resources, which has led us to rely heavily on the plea bargain. In nine out of ten cases today, as we’ve seen, the accused waives his right to trial in exchange for a lighter punishment . . . Constitutional protections do not apply in plea negotiations. And this is particularly consequential because, in plea bargaining, the prosecutor enjoys a tremendous amount of discretion, taking on all the key roles: accuser, investigator, adjudicator, and sentencer. This concentration of authority inevitably leads to unequal treatment and unfairness.

I’m not 100% sure I’m on board with all of the reform ideas in the last chapter – I’m still mulling over the ideas about prison reform – but I appreciate the challenge to my assumptions of what justice looks like. In fact, I can say that about the entire book. I wasn’t unaware of judicial problems before reading this book, thanks to books like Krakauer’s Missoula and the life-saving work of The Innocence Project. However, Benforado’s thorough, systemic approach attacks foundational assumptions that I hadn’t previously examined.

I received a copy of this book for review via Blogging for Books.

Advice Unasked – “The final chapter of suggestions for reform is a scant 29 pages, and very thin. Problems without solutions make many readers uncomfortable, and any courtroom case wraps up with an argument for action, but I wish, nonetheless, for a different conclusion. That chapter could easily be another book, and perhaps it should be.”

Shaina Reads – “I highly recommend it to anyone who wants a deeper understanding of how the brain functions and why humans as a whole are ill-suited to passing objective social judgments.”

5 responses to “Unfair: The New Science of Criminal Injustice by Adam Benforado”