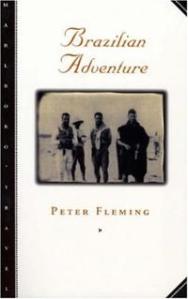 Recommendation from: Jenny of Shelf Love

I’ve written before on this blog that my favorite non-fiction genre is travel memoir, especially if things don’t go according to plan. In Brazilian Adventure, literary editor Peter Fleming (older brother of 007’s creator Ian Fleming) answers an advertisement in the London Times:

The Colonel Fawcett mentioned in the ad was an explorer who famously disappeared in Brazil along with two other men in 1925. Fleming doubts that the advertised expedition, undertaken seven years after Fawcett’s vanishing, will unearth any new information, but is compelled to apply all the same in the role of a correspondent to The Times.

The resulting trip is beset by Brazil’s political instability, weather, and logistical challenges, all of which Fleming describes in a cheery, self-deprecating style. From the first page, he punctures any romantic imaginings the reader may have about such travel:

In treating of the Great Unknown one has a free hand, and my few predecessors in this particular field had made great play with the Terrors of the Jungle. The alligators, the snakes, the man-eating fish, the lurking savages, those dreadful insects – all the paraphernalia of tropical mumbo jumbo lay ready to my hand. But when the time came I found that I had not the face to make the most of them. So the reader must forgive me if my picture of Matto Grosso does not tally with his lurid preconceptions.

Indeed, the most significant obstacle turns out to be the expedition leader himself, Major Pingle (not his real name), who – after a falling-out with Fleming’s party – proceeds to try and sabotage Fleming’s passage out of interior Brazil.

I read and enjoyed Brazilian Adventure over my Christmastime vacation, as it was the book chosen for me by the last Classics Club Spin challenge of 2013. Not only was Fleming’s tale the type of book I generally enjoy, but I absolutely loved his witty writing style. Fleming is sharp but not mean with his wit; he plays quite fair in his descriptions of all the people he encounters, including the nefarious Major Pingle. This light tone is paired with an impressive verbosity. With a lesser writer, Fleming’s prolonged asides and anecdotes would have dragged, but I happily pressed on through his more complicated passages because he was so unfailingly clever and funny. One of my early favorites – a description of approaching Rio by sea:

The water front, still some way ahead of us, flaunted a solitary skyscraper. All sky-scrapers look foolish and unnatural when isolated from their kind. It is only in the mass, huddled and strenuously craning, that they achieve a sort of quaint crude dignity. Alone, cut off from their native background of competition and emergency, they appear gauche and rather forlorn. With this one it was particularly so. Ridiculously at variance with all that we could see, hopelessly irrelevant to all that we imagined, it had the pathos of a boor. It domineered without conviction, the totem of another tribe. It knew itself for a mistake, an oversight, an intrusion. It was like a bag of tools left behind, when the curtain rises, on a stage set for romance.

Later I was told that during the last revolution they threw a full-sized billiard table out of a window on its fourteenth floor. Then I forgave it. Where that sort of thing can happen to them, there is a place for sky-scrapers.

The book was published in 1933, so there were a few cringe-worthy “of its time” moments; I was particularly appalled by the huge amount of animals killed for sport during the trip. The expedition literally left a trail of dead alligators in its wake. Fleming’s descriptions of Brazilians and the interior tribes are not entirely free of ignorance, but these passages are not in “white man’s burden” territory either. The amusement he derives from his adventures in a foreign land is, more often than not, at his own expense.

At times, Fleming’s cultural allusions were too British or too early 20th century for me to grasp, but the feeling of immersion in that time and place was well worth any minor confusion. The book has the dry and humorous sensibility of the great comedy films of its era. I’ve already added some of Fleming’s other books to my to-read list.

Old Scrolls blog: “[Fleming’s] writing style is unusual for an adventure writer; full of subtlety, honesty and humor.  With him there was no stretching of the truth to manufacture heroics, which ironically makes his writing far more riveting and realistic than the tales of chest-banging type adventure writers.”

read_warbler: “I found it an odd mix of interesting and monotonous, to be quite honest. It got a lot better in the last third of the book when there was a race between two factions of the team to get back to civilisation.”

Shelf Love: “Fleming tells his story with style, in an offhand, witty-banter sort of way that makes you feel as if Peter Wimsey at his most urbane were ushering you up the Amazon. He talks as if piranhas are a big disappointment because they didn’t even try to devour him the second he dropped a pinky in the river.”

“Baptism on Wheels” – reading about the Freedom Rides 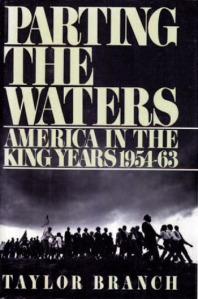 Reading long books slowly is not conducive for frequent posting on a book review blog. When I first started reading Taylor Branch’s Parting the Waters last year, I let myself be constantly distracted by other, shorter books. But now I don’t really have the desire to read anything else. Last night, I was racing through a chapter called “Baptism on Wheels” about the first Freedom Ride in May 1961. For those who may not know, Freedom Riders were African-American and white student activists who rode the interstate buses through Southern states to challenge the illegally segregated buses and terminals. (The Supreme Court had ruled that segregated buses and facilities were unconstitutional but the federal government did not enforce the ruling.)

I knew that the Freedom Riders had been confronted with violence, but reading the whole account of it, bolstered by eyewitness details, was incredibly intense. While reading, I kept audibly reacting to the events, especially as the government and law enforcement allowed angry mobs to savagely attack the students. One of the first attacks resulted in the bus fleeing the terminal, pursued by the mob in their vehicles. When the bus driver had to pull over because of the slashed tires, the driver ran off, and the mob broke inside and set the bus on fire. Fortunately, none of the students died but they were beaten and eventually taken to Anniston Hospital in Alabama. They weren’t to find relief there, either.

Among the alarms to reach [Birmingham preacher/activist] Shuttlesworth’s house in the next hour was a call of distress from Anniston Hospital, where Freedom Riders from the burned Greyhound bus were besieged. A large contingent of the white mob had pursued them there, and hospital personnel, intimidated by the mob, ordered the Freedom Riders to leave, saying their presence endangered other patients. Trapped between the mob’s anger and the hospital’s nerves, without means of transportation, the Freedom Riders huddled in one hospital corner after another, being told repeatedly to go somewhere else. [p. 423] 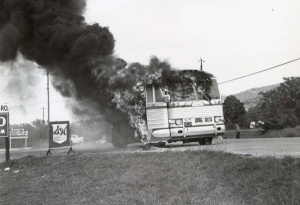 The chapter culminates in a different group of Freedom Riders arriving in Montgomery. Although the Montgomery police well knew that this group would be attacked by a white mob on arrival, there were no cops in sight when the nineteen young activists (seven women, twelve men) disembarked the Greyhound bus. As Freedom Rider John Lewis began to speak to the reporters gathered there, a large white mob attacked the students and the pressmen. Amid the violent chaos, the riders managed to place five of the women in a taxi.

[The taxi driver] told the Freedom Riders that he was going to abandon the taxi. While some of his passengers tried desperately to calm him, others looked back in horror at the loading platform. They, along with several Alabama reporters standing closer, saw a dozen men surround Jim Zwerg, the white Wisconsin exchange student at Fisk in Nashville. One of the men grabbed Zwerg’s suitcase and smashed him in the face with it. Others slugged him to the ground . . . As they steadily knocked out his teeth, and his face and chest were streaming with blood, a few adults on the perimeter put their children on their shoulders to view the carnage. A small girl asked what the men were doing, and her father replied, “Well, they’re really carrying on.” [446] 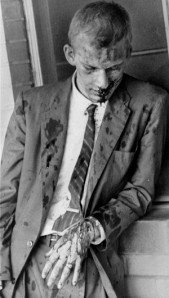 Zwerg, after the attack.

Meanwhile, John Seigenthaler, a Justice Department official working under U.S. Attorney General Robert Kennedy, was in Montgomery, trying to negotiate the protection of the Freedom Riders by segregationist governor Patterson. Knowing the time of the Riders’ arrival, he drove toward the scene and saw Freedom Rider Susan Wilbur being attacked by a crowd of white women.

[Seigenthaler] drove up on the curb and jumped out . . . by the time Seigenthaler reached [Wilbur], the crowd of screaming, angry whites jammed in so tightly upon them that he could not push his way to the car’s back door. He grabbed Wilbur by the shoulders, managed to pull the right front door open, and, shouting “Come on, get in the car,” began to slide across to the driver’s seat. He saw in a flash that another white student – Sue Harmann, whom he had not seen before – had dived into the back.

Wilbur balked. Still absorbing blows, she shouted, “Mister, this is not your fight! Get away from here! You’re gonna get killed!”

Seigenthaler jumped back outside, where people were climbing over his car. “Get in the damn car!” he shrieked at Wilbur.

Wilbur, not sure who Siegenthaler was, kept insisting during the struggle that she was nonviolent and did not want to get anybody hurt. As she did, two men stepped between Siegenthaler and the car door, one of them shouting “Who the hell are you?” With Siegenthaler frantically telling them to get back, that he was a federal agent, the other men brought a pipe down on the side of Siegenthaler’s head. Then the crowd, crushing in to seize Sue Harmann, kicked his unconscious body halfway under the car. [448]

The chapter ends with the eventually rescued riders vowing to continue the ride, including severely beaten riders William Barbee and Jim Zwerg, who made this vow from their hospital beds. Barbee: “As soon as we’re recovered from this, we’ll start again.” Zwerg: “We will continue our journey one way or another,” said Zwerg. “We are prepared to die.”

William Barbee in his hospital bed