An experienced big-game hunter named Allan Quatermain is hired by a wealthy Englishman – Sir Henry Curtis – to help Curtis find his long-lost brother in what is now South Africa. The brother was said to have gone in search of the fabled King Solomon’s Mines, so that is where Quatermain, Curtis, and Curtis’ friend Captain Good set their sights. Curtis also hires a couple of native African men, including one by the name of Umbopa, who seems to have his own mysterious reasons for joining their quest.

When I worked at my college’s writing center, we tutors knew to expect a wave of first-year students with papers comparing the film adaptations of King Solomon’s Mines. I had little desire to see the films myself on their own, but even less after reading a bunch of papers on the subject by somewhat apathetic freshmen. The book didn’t come to my attention until my sister and dad read a couple of Haggard’s books and were discussing them at Christmastime a few years ago.

I remember many of the essays, if not all, focused on comparing the films’ depiction of race. I find myself wanting to focus on the same thing with my book review. I think Heart of Darkness is the only other 19th century book that I’ve read set in Africa and that was a while ago. I was definitely curious about how Haggard would depict the African characters.

Certainly, the story’s narrator, Allan Quatermain has prejudices regarding African people. He has set ideas about their ‘station’. For example, when Umbopa speaks boldly to Sir Henry Curtis near the start of the quest, Quatermain is displeased and angrily demands that Umbopa be more subservient. But it is pretty clear from Curtis’ early respect for Umbopa that we are not to find Quatermain’s opinions to be authoritative in these matters. As the oldest person in the hunting party, Quatermain seems to represent the old guard’s way of thinking, and throughout the story, he has to begrudgingly admit that he’s wrong about Umbopa, among other things.

Indeed, Umbopa becomes a brother-at-arms when their group becomes entangled in a tribal conflict. They throw in their lots with his. The quest for Curtis’ brother becomes almost an afterthought.

So the depiction of race was more complex than I expected from a Victorian novel. I think I get surprised by older book’s depictions of race, sex and class because present-day movies and books usually paint historical societies as being simplistically prejudiced in their views with little modulation. This is not to say that King Solomon’s Mines doesn’t participate in prejudiced views at all. One of the most obvious examples is in the descriptions of the (fictional) Kukuana people. The women are described as handsome – because:

They are tall and graceful, and their figures are wonderfully fine. The hair, though short, is rather curly than woolly, the features are frequently aquiline, and the lips are not unpleasantly thick as is the case in most African races. But what struck us most was their exceedingly quiet dignified air.

And the villain, Twala, is described as:

It was that of an enormous man with the most entirely repulsive countenance we had ever beheld. The lips were as thick as a negro’s, the nose was flat, it had but one gleaming black eye (for the other was represented by a hollow in the face), and its whole expression was cruel and sensual to a degree.

It is possible to argue that it is, again, only Quatermain’s views on display here, and not necessarily the author’s, but I am more inclined to believe that these descriptions of what is beautiful/good and what is ugly/evil are equivalencies of the author’s. Indeed, colorism is still very much an issue today.

King Solomon’s Mines of course was not intended to be read as a time capsule of its times and views. It was a very popular adventure novel in its day. I could see how modern adventure tales descend from it, with its hidden treasures, skeletons discovered in caves, ancient maps, and men dragging across deserts parched with thirst. It’s got a sense of humor too. It’s the kind of tone you find with Indiana Jones movies.

I have to admit that I found the climactic battle scenes to be a bit of a slog. I’m sure there are battle scenes that I have enjoyed in the past, but the detailing of battle strategy with its columns of men, vanguards, regiments and armor just doesn’t readily engage me. I much preferred their adventuring endeavors.

I hope you don’t mind my lengthy digression about one aspect of the book, but I read King Solomon’s Mines a few months ago, and its depiction of race still remained the aspect I most wanted to discuss.

Chamber Four – “Unfortunately, coincidence plays far too large a role in this book. Haggard is not a subtle plotter at all. I won’t spoil the surprises, but it became a reasonable expectation while I was reading that each perilous situation that arose as the adventure moved from one place to the next would be resolved in part by fortune, usually of the most convenient variety.”

Man of La Book – “This is a sim­ple tale, filled with swash­buck­ling adven­tures and explo­rations galore. Some of the book sim­ply drags, other parts are offen­sive in today’s terms (which I don’t hold it against the book) and some parts are sim­ply funny. I espe­cially found the pompous atti­tude of some of the char­ac­ters (mostly Quater­main) hilarious.”

Wet Asphalt – “But still, Allan Quatermain, African explorer, is considered one of the great adventure characters of nineteenth century literature, and I can’t help but feel disappointed at him turning out to be the cowardly, lying, hypocritical and, yes, racist schmuck portrayed in this book.” 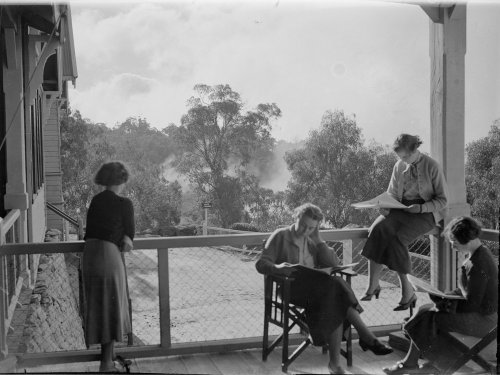 Photo from the State Library of Victoria Collections

The first year I started blogging, I joined all sorts of reading challenges. They were fun to make lists for and I read some great books due to joining those challenges. I haven’t done much of that since my first year, but I’ve had my eye on The Classics Club challenge for several months now. Basically, to join the Classics Club collection of bloggers, you set the goal of reading 50+ classics over five years. (For more information on this, see: http://theclassicsclubblog.wordpress.com/how-to-join/). I like the long-term nature of the challenge and I also greatly enjoy reading classics.

In my own mind, I began this challenge in September when I read King Solomon’s Mines by H. Rider Haggard. So September 2017 is my goal date in which to complete the challenge.

And now to my favorite part, the list! I’ve included a little more than 50 books on this initial list, and may add or subtract along the way. One thing I tried to make sure and do is include some nonfiction classics, especially travel writing classics. Also, I incorporated the remaining unread books on my 19 Books Older than Myself challenge that I created for myself in 2010.

Here goes, by order of title (underlined titles means it has been read):

Farewell to Arms by Ernest Hemingway [1929]

The History of Tom Jones, A Foundling by Henry Fielding [1749]

Keepers of the House by Shirley Ann Grau [1964]

The Last Chronicle of Barset by Anthony Trollope [1867]

An Old-Fashioned Girl by Louisa May Alcott [1869]

Slouching Towards Bethlehem by Joan Didion [1968]

The Small House at Allington by Anthony Trollope [1864]

The Snow Leopard by Peter Matthiessen [1978]

Something Wicked This Way Comes by Ray Bradbury [1962]

Survival in Auschwitz by Primo Levi [1958]

Travels with Charley: In Search of America by John Steinbeck [1962]

A Tree Grows in Brooklyn by Betty Smith [1943] [mini-review]

The Worst Journey in the World by Apsley Cherry-Garrard [1922]

Hello November! Here are a few mini-reviews to usher in the new month:

I read the entirety of The Peach Keeper during a three to four hour car ride this summer from Maine to Logan airport in Boston. Sarah Addison Allen’s books may be quite similar to each other (Main character Willa Jackson reminded me strongly of Julia Winterson friom The Girl Who Chased the Moon) but I never fail to be entertained by them. Like her other three published books, The Peach Keeper is romantic, lightly magical and threaded with humor. A new book by Allen  – Lost Lake – will be released in the early part of next year. According to her website, in 2011, Allen was diagnosed and treated for breast cancer. She has been cancer-free for about a year now, which is great news.

Recommended by: Eva’s Compendium for me

This book was everywhere when it came out years ago. Look elsewhere for a long synopsis, but basically main character Aislinn has the ability to see faeries (runs in the family). When the Summer King faery picks her out as his new candidate for queen, Aislinn must figure out a way to save herself from the evil Winter Queen.

The best way to describe my reaction to this book is approval. I wasn’t thoroughly entertained by the book myself, but if a teenager of my acquaintance loved this book, I would approve. Aislinn is a smart character and I admired how she figured out a way to claim her own life path in the face of circumstances beyond her control. I loved how the book calls out The Summer King (whose name is Keenan) for his stalker ways. For me, the book felt somewhat flat – not disagreeable, but not engrossing either.

Something About You by Julie James

I enjoy listening to the Pop Culture Happy Hour podcast and have picked up a whole host of recommendations (mostly film and TV) from Linda Holmes and the podcast’s other contributors. In one podcast, Holmes recommended romance author Julie James, and I decided to give her a shot. I don’t read romance novels often, but from my small experience I have realized that I tend to like contemporary romance novels that have a sense of humor. I guess Something About You is in a way romantic thriller: attorney Cameron Lynde is a witness to a high-profile murder and FBI agent Jack Pallas is assigned to the case. They have a contentious history but are obviously attracted to each other, etc. But the attraction of the book isn’t really the suspense, but the fact that it is genuinely funny, sexy and very light on angst. (Saying that randomly makes me think of a scene from Firefly where Inara teases Jayne by saying that she has funny stories from being a Companion: “funny and sexy too. You have no idea. And you never will . . . A Companion doesn’t kiss and tell.”)