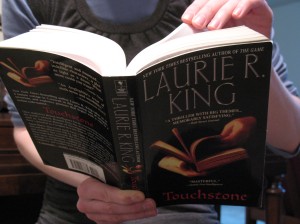 From: Christmas gift from my sister K.

Bureau agent Harris Stuyvesant travels to London in 1926 to investigate a suspected British bomber who has been behind several explosions in the States.  A shady government official connects him to a WWI veteran, Bennet Grey, who has the ability to sense when someone is deliberately lying.  With Grey’s assistance, Stuyvesant goes undercover among one of England’s elite families.

The historical backdrop to this novel is fairly unique.  It is the interwar years in England, and tensions are high in London due to an impending miner’s strike.  The labor unions and the ruling class are at each other’s throats. I appreciated that this was a time period in history that isn’t usually covered in fiction.

Unfortunately, the first 150 pages are so are slow going.  It is very heavy on exposition and there’s an element of showing off research in the dialogue of the main characters.  In a Facebook chat with my sister K. who gave me the book, I admitted that I was finding the beginning to be slow.  She said, “It gets better when they get to the house.”

“The house” is the Hurleigh House, the great estate where Stuyvesant begins his undercover investigation.  It is clear that King loves describing great English country houses – this was demonstrated also in Justice Hall, one of her Mary Russell/ Sherlock Holmes books.  Hurleigh House has some great character to it though, so I didn’t mind the long descriptions too much.

Both K. and I agreed that we weren’t sure we liked Harris Stuyvesant at first.  K. said she was particularly perturbed by this because she had liked Mary Russell right away in The Beekeeper’s Apprentice.  But Stuyvesant comes into his own as a character when he goes undercover.  King does a good job of writing smart characters.  I love getting into their heads as they figure out individuals and group dynamics.  Stuyvesant understands how to win over people, how to strategically play a part to get people to respond a certain way.  He does make mistakes, but it’s still cool to read the intelligence at work.

The ending was not entirely predictable and for that I was glad.  Some of the characters are revealed to be different from how Stuyvesant had pegged them.

The book could certainly have been edited down, in my opinion.  There’s an interesting story there, but it is suffocated in places by too much exposition of the history or the setting.  If you’ve never read Laurie King before, you should start with The Beekeeper’s Apprentice, which is one of my all-time favorite books, with one of my favorite literary characters, Mary Russell.