The Hot Zone by Richard Preston 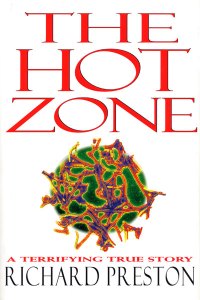 Recommended by: Alyce of At Home With Books

In a nutshell: The Hot Zone first describes a family of ‘thread’ viruses which include Marburg, Ebola Sudan and Ebola Zaire.  These viruses have horrifying effects on the human body, and scarily high kill rate.  Ebola Zaire kills nine out of ten people infected with it.

When monkeys start dying mysteriously in a Reston, Virginia quarantine unit for a laboratory products company in 1989, researchers from the U.S. Army Medical Research Institute of Infectious Diseases (USAMRIID) are contacted.  They are alarmed when they realize that the monkeys seem to be infected with a virus very much like Ebola Zaire.  The Hot Zone closely follows the government’s response to the emergency.

I had first heard about the Ebola virus in the late 1990’s, when I was in high school.  When I read about the symptoms in the newspaper, I thought it sounded like one of the worst ways that you could die.  Preston’s book doesn’t do anything to dispel that conclusion.  The experienced researchers and medical personnel quoted in the book readily and repeatedly state that Ebola terrifies them.

The first part of the book describes the outbreaks in nightmarish detail.  One particular account of an Ebola Sudan outbreak is seared on my brain.  I won’t quote it in full, but here is some of it:

The virus transformed the hospital at Maridi into a morgue.  As it jumped from bed to bed, killing patients left and right, doctors began to notice signs of mental derangement, psychosis, depersonalization, zombie-like behavior . . . There is no doubt that Ebola damages the brain and causes psychotic dementia.  It is not easy, however, to separate brain damage from the effects of fear.  If you were trapped in a hospital where people were dissolving in their beds, you might try to escape, and if you were a bleeder and frightened, you might take off your clothes, and people might think you had gone mad.

After Preston establishes the wider context of the Ebola virus, he concentrates on the story of Ebola’s arrival in Reston, Virginia.  I liked reading about the decision-making processes that the researchers made, and how they examined their choices.  At the time, the public health crisis was kept very hush-hush.  It makes me wonder – not in a paranoid way – what under-the-radar crises are being dealt with now by people I drive past, or ride on the train with here in the D.C metropolitan area.

I think Preston overdoes the foreboding tone at times.  It reminds me of movie scores that are telling you a scene is scary, because the filmmakers decided you couldn’t be scared without a musical cue, all ‘dun-dun-dun‘.  It’s simply not necessary when Preston has so firmly established from the beginning how dangerous and infectious Ebola is to human beings.

That said, the book is very fast-paced and sucks you right in.  I’m actually kind of surprised Ebola hasn’t worked its way into my dreams yet, as my mind tends to absorb stuff like this and spit it back out into vivid narratives while I am sleeping.

When I told my roommate that I expected to have nightmares about what I had read in The Hot Zone, she said why are you reading it?  I’m not sure what the full answer to that would be. The thing is, I am often drawn to the relatively gritty stuff in my choice of books, with the caveat that hope – however slight and tenuous – remains intact at the end.  In The Hot Zone, while there were shudder-inducing mistakes made in the process of dealing with the virus, I still found most of the medical professionals and infectious disease researchers to be portrayed as competent and humane people.

At Home With Books – “As the author relates how a strain of Ebola is potentially being spread throughout a town in Africa I got the same spine-tingling feeling that I get when watching the young girl in a horror movie step outside ‘to see what that noise was.'”

Bibliolatry – “The Hot Zone is all about EBOLA. In fact, that’s how I imagine the word in my head: all in caps. It’s just that intense.”

Shelf Love – “Preston writes in a journalistic style that is friendly to the general, non-science-oriented reader. There’s enough detail that I put down the book feeling like I learned some science, but there’s not so much technical jargon that I ever felt bogged down in it.”

6 responses to “The Hot Zone by Richard Preston”