Lately, it’s been rare that I’ll give a book its own review post. I’ve noticed some other bloggers are tending toward posts of mini-reviews as well – I think it’s a way to keep ourselves in the bookish conversation when we know we don’t have the motivation/energy/time to tinker over longer single-review posts.

So here goes – some end-of-summer housekeeping:

My mom and I slowly read Anne of Green Gables together when I was very young. I still remember the red bookmark that marked our place, but I didn’t remember much of the book as an adult. My sisters and I were huge fans of the miniseries though, so some of the original story was lodged firmly in my nostalgia. This past June, my friend and I took a vacation to Nova Scotia and Prince Edward Island. We both were reading Anne books on the plane ride. Montgomery is prone to some sentimentality, but overall it was a delightful re-read. I loved the friendship and cameraderie between Anne and her classmates. I loved how each concert and outing was such a special occasion for them. I found Marilla to be warmer in the book than she was in the miniseries. I also started Anne of Avonlea while on vacation, but honestly those twins that Marila adopts are such awful characters, and I abandoned it. The miniseries was wise to omit them altogether. On a side note, my visit to “Green Gables” and the site of L.M. Montgomery’s home was lovely (though rainy). 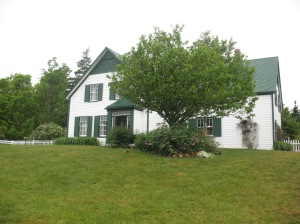 This is a YA fantasy novel, of the werewolf variety. I liked that the main character, Grace, was a pastor’s daughter (pastor’s kids, holla!). I didn’t like that there was standard-issue broody love interest who is mostly a jerk to Grace. I liked that Grace tries to search the internet for the paranormal thing she just learned about, and gets completely unrelated hits. (Unlike other YA books I’ve read where the exact mythology they needed was in the first search result. *cough* Hush Hush *cough*.) I didn’t like the somewhat incoherent climactic fight scene at the end. Other than the things I’m writing down here in this review, I don’t think I’m going to remember much about this book in a year’s time.

Proof by Seduction, and the Turner novels (Unveiled, Unclaimed, Unraveled) by Courtney Milan

Proof by Seduction joins The Governess Affair as the top Milan novels/novellas that I’ve read. Not to knock on the Turner novels, as I burned through them. She is just a master of the romance novel.

I enjoyed the movie, and picked up the book on a whim while at the library. It had some intriguing world-building, and I liked the book version of Julie, who is – because it’s a book – much more realized and interesting. I was unconvinced by the climactic moment, though I know that’s weird to say about a zombie romance novel. Sucks that Julie’s best friend Nora was whitewashed for the film, however, as much as I liked Analeigh Tipton in that role.

I gave this as a gift to my cousin for her birthday. She’d already read it (and liked it) and asked me if I wanted to borrow it. The book is told from the perspective of a woman, Grace Bradley, who had been a young servant on an English country estate during WWI and the interwar years. The narrative toggles between the reminiscing elderly Grace and the young Grace. As I was reading, I found that Riverton strongly reminded me of other books and movies about that time period: shades of Ian McEwan’s Atonement, a sisterly relationship that was reminiscent of the one in Margaret Atwood’s The Blind Assassin, and Julian Fellowes’ work in Gosford Park and Downton Abbey. (Morton’s book predates Downton, but when I read the author interview at the book’s end, I discovered that Morton cited all the other works as influences.) Unfortunately, the similarity of the book to the other works came off to me as derivative. Not to say Riverton didn’t have its moments: in certain scenes, Morton was able to nicely crystallize an atmosphere onto the page.

The Rosie Project by Graeme Simsion (2013, 295 pages.) Recommended by The Captive Reader

I gave this book as a gift to my aunt, who lent it to me after she finished reading it. I read most of it on a car trip and it made me laugh out loud. I found Don Tillman’s narration of his quest for romance to be hilarious. I had doubts about the accuracy of Simsion’s portrayal of Asperger’s, but I’ve seen some reports around the web that seem to give him credit there. Much has already been said about this book, so I’ll just include an excerpt I found particularly funny, from when Don is making dinner for Rosie at his apartment:

I commenced retrieval of vegetables and herbs from the refrigerator. “Let me help,” she said. “I can chop or something.” The implication was that chopping could be done by an inexperienced person unfamiliar with the recipe. After her comment that she was unable to cook even in a life-threatening situation, I had visions of huge chunks of leek and fragments of herbs too fine to sieve out.

“No assistance is required,” I said. “I recommend reading a book.”

I watched Rosie walk to the bookshelf, briefly peruse the contents, then walk away. Perhaps she used IBM rather than the Apple software, though many of the manuals applied to both.

I’d read the first book of the Alexandra Cooper crime novels – this is the third. I like that Fairstein’s background as a prosecutor lends an authenticity and specificity to her protagonist’s work life. For example, while there is the central murder case, Cooper still has to contend with her other cases, work politics, her social life, and a boyfriend. And as the murder victim is part of the art dealer world, Fairstein provides a fascinating inside look there as well. That said, this book ran a little long, tended to info-dump at times, and I really dislike the character of one of Cooper’s cop buddies, Mike Chapman. Not sure if I’ll pick up another from this series.

This book series has a huge following, but like the laggard I am, I didn’t pick the first book up until right before Showtime aired its tv show adaptation. I spent much of a weekend flying through this book, but after the weekend ended, it took me a while to pick it back up and finish the last bit (where Claire punches a wolf!) Anyway, I really liked the main character of Claire. She was clear-headed and compassionate, and seemed to cope with unexpected time travel pretty well. The story somehow manages to be non-stop things-happening without sacrificing quality character interaction. I’m not in the camp of Claire/Jamie being a favorite literary couple, but I liked them.

**Spoilers for first book** Unlike Claire however, I would have hitched a ride back to my own time without hesitation. Almost getting killed in a literal witch-hunt? Screw that. That said, the scene where she returns to Jamie after deciding to stay in his time was a high point in the novel for me. Also, the part where she sees the Loch Ness Monster was both beautiful and ridiculous at the same time.***End Spoiler**

I’m not sure if I will pick up the subsequent books. I watched the first few episodes of the show with my co-worker, and it hews pretty close to the book, but it’s still gearing up for the good stuff.