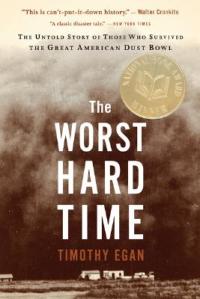 The Worst Hard Time: The Untold Story Of Those Who Survived The Great American Dust Bowl

The subtitle of Egan’s book – “The Untold Story” – rings true to my own experience. Though I knew of the Dust Bowl and when it occurred before I read this book, I knew very little else. I hadn’t even read Grapes of Wrath. Perhaps if I hailed from the states affected, I might have learned about it from school or older family/community members.

Or perhaps not. In the introduction to his book, Egan shares this anecdote:

Outside Inavale [Nebraska] not long ago, an old woman was found burning a Dust Bowl diary written by her husband. Her neighbor was astonished: why destroy such an intimate family record? The horror, the woman explained, was not worth sharing. She wanted it gone forever.

Through research and his own interviews with still-living survivors of the Dust Bowl, Egan recounts the events that led up to the Dust Bowl before detailing what life was like in the 1930’s for the areas affected by the incessant “dusters”. The map in the book shows the affected area to include parts of the Texas and Oklahoma panhandles, southeastern Colorado, a large swath of Kansas, and parts of southern Nebraska.

The most interesting piece of this book for me was learning of the factors that led to the Dust Bowl. Before it was “civilized”, this part of the United States was a grassland filled with buffalo. The buffalo were killed – partly as a way to drive off the Native American tribes that depended on the bison – and replaced with cattle. When the cattle died in massive numbers due to the harsh winters of the plains, various enterprising and frankly fraudulent companies hawked the land as farming real estate. These companies banked on people anxious to fulfill the land-owning version of the American Dream. The windmill and the tractor were trumpeted as the tools to attaining wealth in a market that favored the wheat farmer. But just as the cattle were not made for the plains, neither was wheat. With all the native grassland stripped away, and cropfields abandoned after the market took a downturn, the soil turned to dust and began rising up in storms that infiltrated homes and sickened the plants, animals, and humans that were in the storms’ paths.

Due to an alchemy of corruption, false advertising, wanton environmental destruction, and bad science (authority figures explained to would-be farmers that rain was triggered by plowed earth), thousands of people endured years and years of misery. The cause and effect of the Dust Bowl is a cautionary tale worth hearing, as that particular American alchemy is still in operation today. As I read, I couldn’t help but hear echoes of this tale in current events.

Most of the book follows a cast of real-life people through the Dust Bowl, clearly drawing on oral history, interviews, and diaries (indeed some chapters are outright transcriptions from one particular diary). Egan provides contextual detail every time a “character” reappears in the history, which proved very helpful if you read the book intermittently, as I did. That said, most of the book dragged for me. Reading The Worst Hard Time reminded me somewhat of reading Stewart O’Nan’s The Circus Fire (about the deadly Hartford circus fire of 1944). In both books, the authors seem reluctant to leave out any detail that was recounted to them by their interview subjects. The result may be a faithful tribute to these survivors, but some narrative momentum is lost in the process.

Avid Reader’s Musings: “Egan has a wonderful talent for blending anecdotes with information.”

BookLust:  “I really enjoyed the first half but got much more distracted in the second.  Still, it was good to read about so many people who lived through so much.”

Prairie Progressive: “While Egan educates the reader on [the natural and political effects of the Dust Bowl], at bottom his focus is on people, what they confronted and how they attempted to survive. That is the strength of the story — and the strength of the plains.”

If I knew very little about the Dust Bowl, it’s possible that I knew even less about the history of Hawaii. Vowell combines travelogue with history in Unfamiliar Fishes, particularly focusing on the era in Hawaii’s history after missionaries arrive in 1820 and before the shady 1898 annexation of Hawaii by the United States government. For all of her acerbic wit, Vowell deals fairly with the Puritan-minded missionaries, contextualizing them in their worldview. She doesn’t portray the native Hawaiians as saintly victims of Western power plays, but as a people who had their own complex, evolving culture and inner politics.

The first two-thirds of the books are very strong, as Vowell mixes the history with descriptions of her own visit to Hawaii with her pre-teen nephew. I also liked reading the connections that Vowell made between Christian missionaries’ and the U.S. Government’s interaction with Hawaiians and these same entities’ interaction with the Cherokee people. As author Paisley Rekdal said at this year’s National Book Festival, connectivity is the primary goal of creative nonfiction, and Vowell succeeds in this.

The last third of the book tends toward info-dump territory. The facts come to the reader in leaden lumps, unlike the fine blended nature of the rest of the book. Still, it was worth it to learn about the sneaky way that Hawaii was annexed by the United States: among other things, when thwarted from getting the 2/3 majority needed to ratify an annexation treaty, Congress annexed Hawaii by joint resolution, which required only a simple majority to pass. Former President Grover Cleveland opposed this action and lamented when it came to pass. He wrote to his former secretary of state: “Hawaii is ours. As I look back upon the first steps in this miserable business and as I contemplate the means used to complete the outrage, I am ashamed of the whole affair.”

The Book Shopper – “. . . I never get a feeling of what it is like to live in Hawaii then or now. Vowell’s purpose in writing the book is to remind us of our American hegemony. As Vowell tells her nephew Owen at the end of the book “It’s about how people like us wrecked this place.””

S. Krishna’s Books – “While Unfamiliar Fishes is well-researched, it isn’t quite as engaging as some of Vowell’s other works.  It’s never dry or boring, but Vowell clearly doesn’t have the same passion for Hawaiian history as she does for presidential assassinations.”

That’s What She Read – “[Sarah Vowell presents her research] with a fresh, tongue-in-cheek appreciation for the damage Americans have done to the native culture without pontificating too much.”